According to the 2011 Survey on Children, there are 2.1 million Filipino children in child labour. Findings of the United States Department of Labor (USDOL) in 2015 revealed that the Philippines made significant advancement in efforts to eliminate the worst forms of child labour. Despite progress, however, enforcement of child labour laws remains a challenge.

“Child labour is complex and deeply rooted in poverty. Children suffer and risk their health or even their lives to work for their family’s survival. Ending child labour requires strong commitment and collective effort,” said Khalid Hassan, Director of the ILO Country Office for the Philippines who also managed projects to address child labour in Africa and Asia.

The Strategic Helpdesks for Information, Education, Livelihood and other Developmental Interventions (SHIELD) is the first comprehensive project of DSWD on child labour. It will strengthen efforts at the local level, which will include helpdesks and a local registry on child labour for referral and convergence of support services. SHIELD will focus on areas with high incidence of child labour as priority to create an impact and to make services more accessible to children and their families. Interventions will be based on data from the Child Labor Local Registry.

The Pantawid Pamilyang Pilipino Program (4Ps), the conditional cash transfer programme of the DSWD will also launch and integrate a new module on child labour. The 4Ps has a reach of about 4 million households from the poorest of the poor, who are often forced to involve their children in work to augment the family income. The 4Ps contributes to putting children in schools through its conditionality on education. Being in school, however, is not an assurance that children will not engage in child labour. The child labour module will be part of the Family Development Sessions to raise awareness on child labour and the role of the family to prevent or to end child labour, especially its worst forms.

CARING Gold is a new project implemented by the ILO and BanToxics! together with DOLE and DENR and funded by the USDOL. Child labour in mining is considered as a worst form of child labour but remains unregulated and unmonitored. The project will address child labour in mining at its root cause, which is poverty and vulnerability. Interventions will also include improving working conditions and providing support to establish models for operation that are legal and viable as well as compliant with labour, environmental and health standards.

These initiatives overall support the Philippine Program against Child Labor 2017-2022 to withdraw one million children from child labour and the Sustainable Development Goals (SDG), which calls to end child labour in all its forms by 2025. 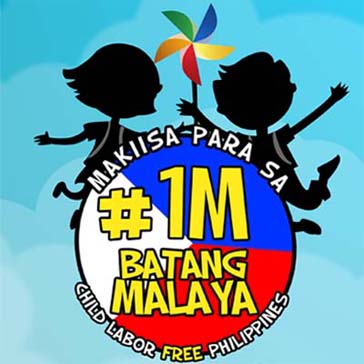 Makiisa Para sa #1MBatangMalaya: One With the Children in Ending Child Labour