Although there is not an official definition proposed by ILO yet, the ILO Regional Conference on Social Economy, Africa’s Response to the Global Crisis (October 2009) defined the Social and Solidarity Economy (SSE) as a “concept designating enterprises and organizations, in particular cooperatives, mutual benefit societies, associations, foundations and social enterprises, which have the specific feature of producing goods, services and knowledge while pursuing both economic and social aims and fostering solidarity”.


The ILO and the Social and Solidarity Economy

The ILO boasts a long tradition and experience in the SSE. In fact, the ILO’s Cooperatives Unit was established in 1920, one year after the ILO’s creation, and the first official document to make direct reference to enterprises in the social economy dates back to the year 1922.

The ILO’s commitment to the advancement of the SSE is grounded on its Constitution, on the ILO Promotion of Cooperatives Recommendation, 2002 (No. 193), on the 2008 ILO Declaration on Social Justice for a Fair Globalization and on the 2019 Declaration for the Future of Work in which it is indicated that the ILO should concentrate its effort in “supporting the role of the private sector as a principal source of economic growth and job creation by promoting an enabling environment for entrepreneurship and sustainable enterprises, in particular micro, small and medium-sized enterprises, as well as cooperatives and the social and solidarity economy, in order to generate decent work, productive employment and improved living standards for all”.

In February 2019, at the Social Economy National Consultation Conference held in Durban, South Africa, the ILO Director-General Guy Ryder reflected on the relevance of SSE organizations and their value-driven, human-centred approaches in addressing the challenges in the changing world of work. “Social and solidarity economy organizations are well positioned to become an essential part of the tool kit for achieving the 2030 Agenda for Sustainable Development in general and for better localizing the SDGs in particular. Building on their value-driven and human-centred approaches, they can help build a new economy strives for social justice and decent work.” said Mr Ryder. His full speech is available here.

The UNTFSSE was established to raise the visibility of the SSE in international knowledge and policy circles as it holds considerable promise for addressing the economic, social and environmental issues faced by today’s world. The SSE is an important approach for the integrated implementation of the 2030 Agenda for sustainable development. Thus, the UNTFSSE works to support the SSE as a means of implementation of the Sustainable Development Goals (SDGs), acting as a hub for inter-agency coordination and knowledge sharing on how to replicate, scale up and build an enabling environment for SSE. The UNTFSSE also serves as a conduit for civil society voices to interface with policy making. Currently chaired by the ILO, the Task Force has 18 UN Agencies and the OECD as members and 13 civil society organizations as observers.

The SSE Academy is an interregional training opportunity gathering practitioners and policymakers from all around the world, to share their experiences, best practices and challenges from their work in the SSE. Organized together with the ITC-ILO, the training seeks to provide a better understanding of the concept of SSE, discuss the relevance of SSE as a development alternative and its relation to the ILO’s Decent Work Agenda, and further build and strengthen networks of SSE practitioners. The first SSE Academy took place in Turin (Italy) in 2010. Since then, eleven SSE Academies have taken place in Montreal (Canada), Agadir (Morocco), Campinas (Brazil), Johannesburg (South Africa), Puebla (Mexico), San José (Costa Rica), Seoul (Republic of Korea) and Luxembourg City (Luxembourg), Turin (Italy), and Madrid (Spain).

The ILO’s Cooperatives Unit is technically backstopping the following projects on cooperatives and the wider SSE.
In addition, the Cooperatives Unit is undertaking multi-country research initiatives to enhance the role of SSE given the magnitude of the changes affecting the world of work, and the challenges posed by social finance.

Country case studies on public policies for the SSE Multi-country studies on the role of the SSE in the world of work Studies on the SSE from a South-South and Triangular Cooperation (SSTC) perspective Many other publications on past SSE Academies and related topics are also available in the following ‘further information’ section.

Call for expression of interest – Study on mapping SSE in six countries in Asia Call for expression of interest – Study on social innovation through SSE in Africa Second Meeting of the Steering Committee for the Jordan Cooperative Development Strategy is held Lessons from the Social Economy Policy project in South Africa: Understanding diversity Launch of FORTER'ESS Project - Strengthening the resilience and promotion of decent work of women-led SSE organizations in Tunisia Joint COOP/Social Finance research initiative on Social and Solidarity Economy (SSE) and social innovation in Africa Social and Solidarity Economy highlighted as an alternative model of growth in the UN Secretary General’s Report on “Socially just transition towards sustainable development: the role of digital technologies on social development and well-being of all” Lessons learned from Social and Solidarity Economy (SSE) policy development in South Africa: One-size does not fit all ILO participated in the High-Level Meeting on the Social and Solidarity Economy (SSE) in the European Union ILO and UNTFSSE participate in the second meeting of the Monitoring Committee of the Luxembourg Declaration under the Spanish Presidency UNTFSSE participates in the Side event 2020 International Day of Persons with Disabilities (IDPD): “Building Back Better: Action Toward a Disability-Inclusive, Accessible and Sustainable Post-COVID-19 World” The UN Task Force on Social and Solidarity Economy (UNTFSSE) held its 33rd regular meeting ILO COOP 100 Webinar V - SSE momentum: Finance for Inclusion and the Future of Work during Covid-19 pandemic The ILO chaired a session on civil and public initiatives to consolidate the SSE at the GSEF Global Virtual Forum A joint initiative of the UNTFSSE and SOCIOECO: online archive on social and solidarity economy (SSE) laws UNTFSSE participates in the closing plenary session of the GSEF Global Virtual Forum The UNTFSSE virtual event on “Why does SSE matter for the Agenda 2030 and the recovery post COVID-19?” was held on 21st October 2020 The UN Task Force on Social and Solidarity Economy (UNTFSSE) held its 32nd regular meeting UNTFSSE participates in the launching of the MedTOWN conference UNTFSSE participates in the closing session of the first edition of the Digital Mont Blanc Meetings KoSEA and ILO convene a second virtual interim research workshop with country researchers for the ILO project on strengthening SSE policy in Asia First training session “Social economy: tool for decent work creation and social inclusion” organized by ITC-ILO in cooperation with ILO and Euricse

Dignità in campo in Italy

UNTFSSE statement on “What role for the Social and Solidarity Economy in the post COVID-19 crisis recovery?” [pdf 152KB]

Recent developments in Cameroon’s social economy law and policy Interview with Michele Pellegrini: The experience of a social cooperative, Cadore in Italy

ILO contributes to a preparatory meeting of an international event “The Economy of Francesco” in Assisi, Italy The ILO SSE Academy in Spain highlights the potential of the SSE in shaping the future of work for all Uruguayan Chamber of Senators approves a law on the social and solidarity economy ILO COOP sends a message to the MedUp Project Peer Review Meeting in Tunis The Republic of Djibouti passes a law on the social and solidarity economy (SSE) ILO’s participation in the International Conference on Localizing the SDGs and Co-Constructing the Means of Implementation ILO shares its work on social economy in the Maghreb at the 11th Convergences World Forum Cooperatives can play key role in future of work Exchange of knowledge and experience on SSE public policies for local economic development in Spain 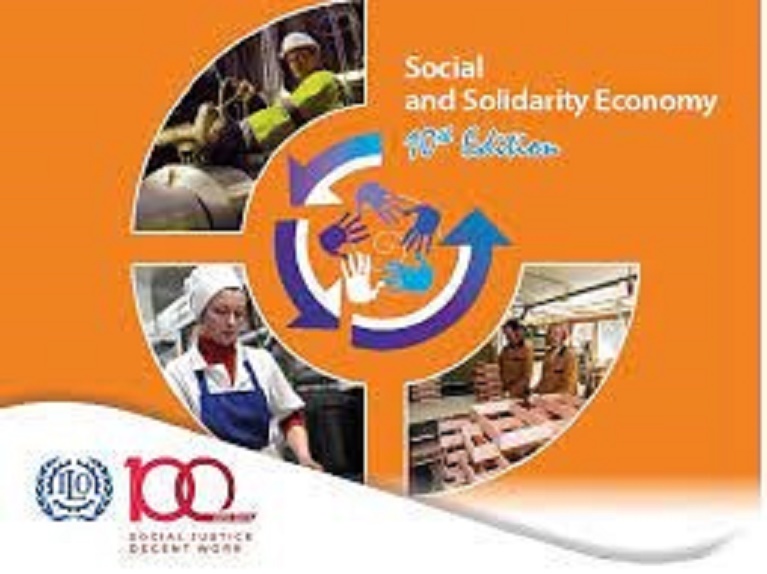