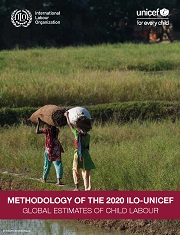 Download:
The ILO produced Global Estimates of Child Labour for the first time in 1995, when it estimated the total number of children engaged in child labour at 250 million. Since then, the ILO has released five comprehensive editions of Global Estimates of Child Labour. A steady decline in child labour was reported worldwide over this period, from 245.5 million in 2000, to around 152 million in 2016.

These figures played a crucial role in bringing to public attention the size and nature of the phenomenon, helping governments, social partners and civil society formulate and monitor policies for combating child labour throughout the world.

The current sixth edition of the Global Estimates of Child Labour provides updated estimates for 2020 and has been produced for the first time in partnership with UNICEF. These estimates are based on a wide range of nationally representative household surveys, covering fully or partially the target population of children aged 5 to 17 years old.

In the current sixth edition of the Global Estimates of Child Labour, an attempt has been made to improve the imputation methodology of child labour data for countries without surveys. To gauge trends in child labour and other related indicators at the regional and global levels, a series of econometric models were developed to account for the non-randomness in missing data. These efforts will improve accuracy of the estimates and also ensure replicability of the estimation process, thereby facilitating updates and the development of subsequent global estimates.