On 8 January 2019, the United Kingdom deposited the instrument of ratification of the Work in Fishing Convention, 2007 (n°188) with the International Office, the first ratification registered in the ILO’s centenary year. The United Kingdom, a major actor of the European fishing sector, is the 13th Member State of the ILO to ratify Convention No. 188. Adopted by the International Labour Conference in 2007, the Convention revises and brings up-to-date earlier ILO fishing Conventions. It provides a modern and flexible regulatory framework for the more than 38 million people worldwide who work in capture fisheries and covers both large fishing operations and small-scales fisheries. The United Kingdom fishing sector (capture) represents a fleet of more than 6 thousand vessels and more than 12 thousand fishers.

In depositing the instrument of ratification of the Convention n°188, Ms Nusrat Ghani, stated: ““Fishing remains one of the most dangerous industries in the UK, which is why I met with MPs and industry last year to encourage measures for fishermen to be safer at sea. But more can be done. For 100 years, the UK has supported the ILO to protect and promote fishermen’s rights. Ratifying this convention now means that all our health and safety legislation has been extended to clarify the duty of fishing vessel owners towards their crews”. She added: “I am proud to mark the ILO’s centenary today by committing to enhancing working conditions on behalf of the UK, the first country to do so this year.”

When receiving the instrument of ratification, the Director-General of the ILO, Mr Guy Ryder, stated: “I welcome this first ratification during the ILO’s centenary year and that the United Kingdom, an important actor of the International and European fishing sector, supports global efforts to promote decent living and working conditions for fishers. Convention n°188 has recently came into force, on 17 November 2017, and we are expecting several more significant ratifications during the year of the ILO centenary. The ratification by the United Kingdom, achieved after a process of intense tripartite consultations, marks a decisive step in this regard. It paves the way for a wider and better implementation of this landmark Convention which ensures adequate protection for numerous fishermen who usually work in hazardous conditions.”

Convention n°188 will enter into force for the United Kingdom on 8 January 2020, one year after its ratification. The Convention has now been ratified by: Angola, Argentina, Bosnia and Herzegovina, Congo, Estonia, France, Lithuania, Morocco, Namibia, Norway, Senegal, South Africa and the United Kingdom. For more background information on ILO’s work in the fishing sector, please visit the ILO’s dedicated Fisheries webpage. 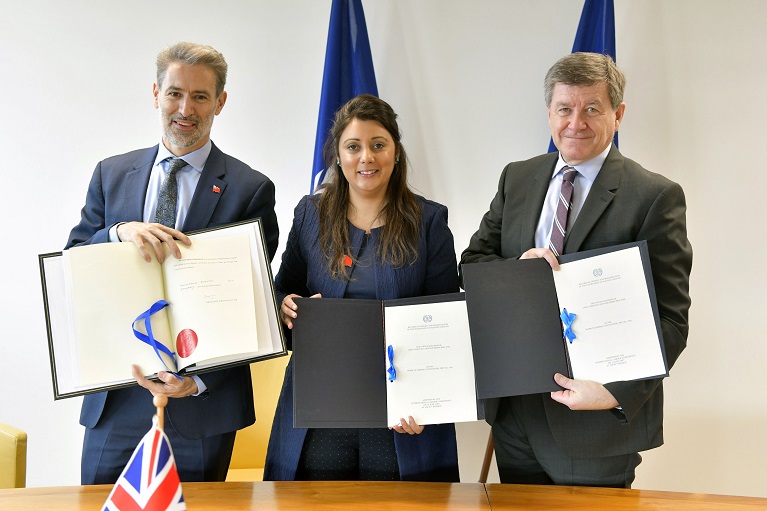