This story was written by the ILO Newsroom For official ILO statements and speeches, please visit our “Statements and Speeches” section.
GENEVA/ DHAKA (ILO News) – The Rana Plaza Coordination Committee announced today that it has raised all the funds required to enable the scheme to make full payments to all victims in the coming weeks.

The Committee which represents all industry stakeholders had estimated that US$30m was required to ensure that all victims can receive fair and equitable compensation according to ILO Conventions.

By April 2015, the second anniversary of the Rana Plaza accident, over $27m had been raised and the Committee had paid out 70 per cent of the awards promised to over 2800 claimants. Further donations, including one significant sum pledged late last week mean that $30m has now been reached and all final payments can be made.

ILO Director-General Guy Ryder was encouraged by the action taken by the Government of Bangladesh, the country’s employers, workers, international brands, trade unions and NGOs on the Committee to ensure that fair compensation can now be paid to all victims of this terrible tragedy.

“This is a milestone but we still have important business to deal with. We must now work together to ensure that accidents can be prevented in the future, and that a robust national employment injury insurance scheme is established so that victims of any future accidents will be swiftly and justly compensated and cared for,” he said.

The International Labour Organization (ILO) has acted as chair of the Rana Plaza Coordination Committee since its establishment in October 2013. It has supported the Committee to design one coordinated arrangement for all victims of the accident based on ILO Conventions.

In January 2014, the ILO also established the Rana Plaza Donor Trust Fund to support the Committee’s effort to finance the scheme. Bangladesh does not yet have a national employment injury insurance scheme to protect victims of accidents at work although ILO is now working with the Government, employers’ and workers’ organizations, donors and industry partners to establish one. In this context the full implementation of the Rana Plaza Arrangement within a two year period will represent a very significant step forward. 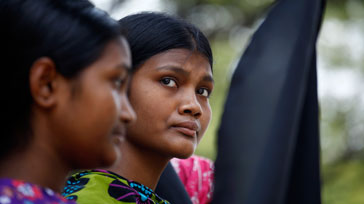 Latest ILO news on the garment industry in Bangladesh