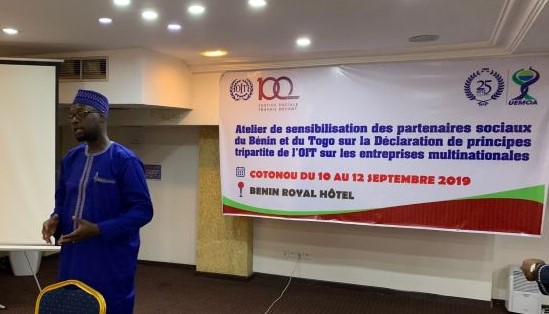 Dr Birane Thiam, Permanent Secretary of the Council for Labour and Social Dialogue of the UEMOA at the sensitization workshop on the MNE Declaration for Benin and Togo

West Africa is the region of the African continent that, along with North Africa, currently attracts most of foreign direct investment (FDI). This inflow of capital generates many reflections within the West African Economic and Monetary Union (WAEMU) and its member States to encourage investments that contribute to sustainable development priorities and the realization of decent work in the sub-region. The WAEMU Labour and Social Dialogue Council turned to the International Labour Organization (ILO) and recognized the importance and relevance of the recommendations of the Tripartite Declaration of Principles concerning Multinational Enterprises and Social Policy (MNE Declaration) for inclusive economic development and decent work for all.

The Labour and Social Dialogue Council is an advisory body of the WAEMU. Created by the Additional Act n ° 002/2019 / CM / UEMOA of March 17th 2009, it consists of 72 members representing governments, employers, workers and civil society. It pursues the following three missions: (1) examine and assess any issues likely to have a social impact in the Union; (2) strengthen the mechanisms of consultation and tripartite concertation within the Union and (3) consolidate the social dialogue process and structures in member States. Its role is to formulate opinions, make recommendations and proposals on its own initiative or on the initiative of the WAEMU Commission, the Council of Ministers and the social partners.

Côte d'Ivoire and Senegal (two of the eight UEMOA’s member States) pioneered the appropriation of the MNE Declaration. They were the first African countries to designate national focal points for its promotion, thus demonstrating their willingness to implement its principles.

Senegal was already making history in August 2017 by creating the first Tripartite Commission for the promotion of the MNE Declaration within its High Council for Social Dialogue, thereby responding to the call of the Abidjan Declaration on strengthening the role and the impact of national social dialogue institutions for more effective and fair economic and social governance adopted by eleven social dialogue institutions from West and Central Africa.

The MNE Declaration sets out principles directed to multinational and national enterprises, governments of home and host countries, as well as employers’ and workers' organizations for the achievement of decent work for all. Côte d'Ivoire and Senegal were able to sensitize more than 500 representatives of the government, employers 'and workers' organizations, enterprises within the framework of the project “Enterprises and decent work: promotion and application of the ILO MNE Declaration” funded by the French government.

In order to share the experience of Côte d'Ivoire and Senegal with the other six UEMOA member States, the WAEMU Labour and Social Dialogue Council invited the International Labour Organization (ILO) to present the MNE Declaration and to discuss its application in the sub-region at its 9th General Assembly in December 2018 in Ouagadougou, Burkina Faso. The Council, in accordance with its missions, then decided to dedicate the 5thmeeting of its Social Dialogue Commission to a reflection on the MNE Declaration and to the drafting of an opinion. The objective was to gain a better understanding of the Declaration, to reflect on the possibilities of promoting it among WAEMU member States and to prepare a draft resolution on this relevant instrument for consideration by the members of the Council.

In March 2019, the 16 members of the Council’s Social Dialogue Commission chaired by Senegal were able to benefit from the support of the ILO to deepen their knowledge of the MNE Declaration, to clarify the roles and responsibilities of the different actors involved in promoting responsible and sustainable business practices and to initiate a reflection on corporate social responsibility (CSR) strategies to be strengthened or implemented at the WAEMU and national levels. Following this reflection, the Commission produced a draft opinion and an action plan for the promotion of the MNE Declaration in WAEMU member States.

The Opinion contains recommendations to WAEMU member States, to the Commission and to the social partners (employers' and workers' organizations) and addresses measures to be adopted to actively contribute to the promotion of decent work, to support the integration process at the sub-regional level and to improve social governance with regard to the operations of multinational enterprises and their investments. In particular, the opinion recommends to member States to:
In addition, WAEMU member States’ governments are encouraged to appoint national focal points on a tripartite basis with employers' and workers' organizations and to create platforms for enlarged tripartite social dialogue to enable tripartite constituents and multinational enterprises to consider possible opportunities and to identify the changes related to the activities of multinational enterprises in the national context. The WAEMU Commission is encouraged to adopt a CSR strategy, strongly inspired by the principles of the ILO MNE Declaration. It is also recommended to the social partners to take into account the principles of the MNE Declaration when concluding collective agreements and enterprise agreements.

Following a request for technical support sent by the Council, the ILO supported to WAEMU’s efforts to promote the MNE Declaration in the context of a partnership. The partnership enabled the Council to organize tripartite awareness workshops for Benin and Togo (September 10-12, 2019) and with the High Council for Social Dialogue of Burkina Faso (October 8-10, 2019) with the technical and financial support of the ILO. Further requests for technical support were formulated by other WAEMU member States, which will benefit from sensitization and capacity-building workshops in 2020.

The ILO has analysed and documented the experiences of different countries in the field of tripartite social dialogue, multinational enterprises and foreign direct investment (FDI) in a study, which contains many interesting conclusions on areas in which national social dialogue institutions could potentially become involved, as well as opportunities and obstacles to their involvement.

The experience of the WAEMU and the role played by the social partners has been shared with other African regional organizations as well as with organizations from other regions. For Africa, this development allows to contribute actively through social dialogue to the structural transformation of the economy and to the achievement of decent work for all, objectives of the Agenda 2063 of the African Union.

In the Abidjan Declaration "Advancing Social Justice: Shaping the future of work in Africa" adopted on December 6, 2019 following the 14th African Regional Meeting of the ILO, African states are also committed “continuing to promote the Tripartite Declaration of Principles concerning Multinational Enterprises and Social Policy, with a strong emphasis on supporting the tripartite constituents”. The Abidjan Declaration also calls for the strengthening of synergies between the ILO and African institutions, namely the African Union Commission, the regional economic communities and the three labour administration centres, which play a supporting role in the implementation of the priority areas of the African Decent Work Agenda, a critical aspect to take into account in the implementation of actions aimed at promoting the MNE Declaration.