Amman, Jordan (ILO News) The International Labour Organization (ILO) and the Ministry of Agriculture (MoA) in Jordan have signed an agreement expanding joint employment-intensive activities in agriculture and forestry, designed to generate immediate jobs for Jordanians and Syrian refugees.

The work is being implemented under a Norwegian-funded ILO project, which is helping Jordanians and Syrian refugees access decent work in the sector, through the use of employment-intensive methods.

In July 2018, the first phase of the project was completed. It supported 1,199 Syrian refugees and Jordanian workers access short-term employment. The new phase is set to benefit 1,000 Syrians and Jordanians.

“(This project) will have a positive impact on local communities and on addressing poverty and unemployment, while also creating job opportunities for Jordanians and Syrian refugees”, said Minister of Agriculture, Khaled Huneifat. “It will also have an impact on the agricultural sector, the environment and the protection of our forest.”

“The success of the first phase of the project has allowed us to expand our work with the Ministry of Agriculture,” said Maha Kattaa, coordinator for the ILO Syrian Refugee Response in Jordan. “In the initial phase, we focused activities on five governorates. We are now working in eight governorates and we hope that we will be able to expand our work further in efforts to generate more jobs for Jordanians and Syrians.”

With the support of local partners, the programme will assist refugees in obtaining work permits, as part of on-going efforts to formalise their employment in Jordan’s labour market. It will ensure that farmers from both communities are employed under decent working conditions, which abide by international labour standards, including occupational health and safety standards.

It will also provide staff at the Ministry of Agriculture and local contractors with training on labour-based technologies, introducing Green Works and Local Resource Based (LRB) approaches, which combine and optimise the use of local resources including labour.

The project will target men and women, including persons with disabilities. It will be carried out in the governorates of Ajloun, Jarash, Albalqa, Karak, Tafila, Madaba, Zarqa, and Ma’an.

The ILO has been working hand-in-hand with host countries and development partners to support efforts to increase economic opportunities and employment creation in the region – for both refugees and host communities – through promoting an employment-rich national response , embedded in the principles of decent work.

In Jordan, the ILO has adopted a development-focused and employment-driven Programme of Support to the Jordan Compact. It includes supporting the immediate creation of decent jobs for Syrian refugees and Jordanians to ease current labour market conditions, while tackling long-term labour market weaknesses.

The government of Jordan, through its Compact, which was presented at the London Syria Conference in 2016, agreed to allow Syrians into selected occupations of the labour market, in return for improved Jordanian access to the European market, soft loans, and increased foreign investment in the country.

Since then, more than 100,000 work permits for Syrian refugees have been issued and renewed. 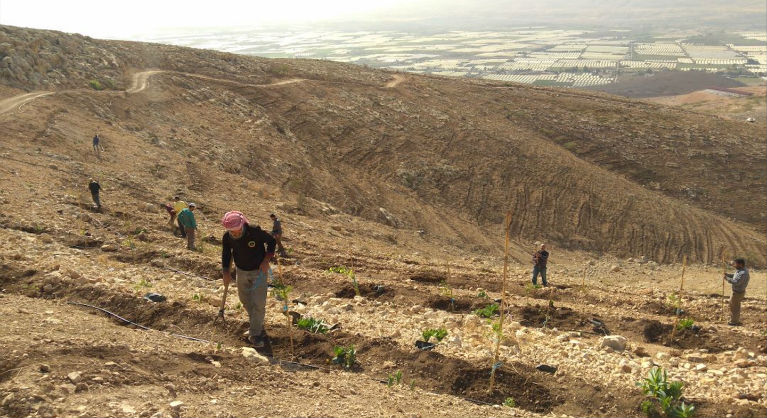