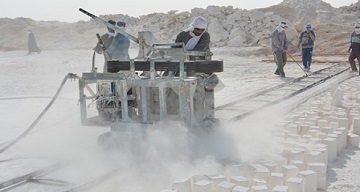 MINYA (EGYPT) – Every day almost 8 thousand workers work in extreme conditions in the stone quarries of Minya, a region of Upper Egypt, 300 km south of Cairo.
With only basic resources and without any social protection, these informal economy workers are at risk of occupational disease and workplace accidents are commonplace.

Almost 80% of quarries in Egypt are not legally authorized and only 10% of workers in the sector have social insurance.

Stone extraction is the main industry in Minya, in these mountains 20 kilometres from the city. Old, badly-maintained machinery operated without safety precautions poses a real danger to workers. Witnesses say there have been several accidents including two fatal. Workers’ health is also put at risk by the dust, which can cause serious lung and eye disease. On account of these multiple risks, the life expectancy of the workers in these opencast mines is only 45.


A solidarity and compensation fund for quarry workers


Following the events of January 2011 in Egypt, an independent trade union was established in 2012 that unites most of the workers in these mines (the Autonomous Trade Union of Minya Quarry Workers). Thanks to that union, a solidarity and compensation fund has been set up for workers who fall victim to occupational accidents and the families of those who die as a result of such accidents. The fund, which is jointly funded by the workers and the regional authorities, was set up in response to the lack of social protection for workers in this sector.

With the support of the Egyptian Democratic Labour Congress (EDLC), the Autonomous Trade Union of Minya Quarry Workers plans to negotiate with the local authorities to ask them to support the solidarity and compensation fund. 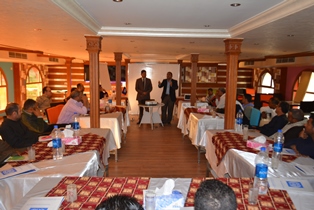 Following a technical visit to the quarries, training was organized by the Bureau for Workers’ Activities (ILO-ACTRAV), with the support of ILO’s Cairo Office. Thirty trade unionists from the Minya quarries took part in the training, which covered health and safety at work and social protection for quarry workers.The trade unionists shared their experiences on topics relating to the risks of the informal economy in Egypt, health and safety measures for quarry workers and social protection for this category of workers.
At the end of the training the trade unionists made some recommendations, including:


Moving towards the creation of a federation of quarry workers


The quarry workers of Minya plan to strengthen their trade union and create a federation with workers in other regions, a federation of quarry workers at national level that can act as a force for negotiation and proposals and is capable of being a representative and credible interlocutor with the employers.

“ILO supports the union of the Minya quarry workers and will accompany the union as it works towards creating a federation that is representative at the national level in order to strengthen tripartism and social dialogue in the country”, says Mohamed Trabelsi, Senior Specialist in Workers’ Activities (ILO-ACTRAV). “We support these workers’ demands to leave the informal economy in the mines. For that to happen, these workers must enjoy the conditions of decent work and social protection in a context of occupational health and safety”, Mr Trabelsi added.

Given the challenges of occupational health and safety in Egypt’s informal economy, further training is planned for domestic workers and workers in the agricultural sector.

Working conditions in Bangladesh: challenges and opportunities
Skip to top