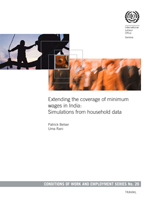 Download:
The present working paper discusses minimum wages in India, seeking to make a constructive contribution to an ongoing national debate and relying also on experience and example from other countries. Specifically, the paper simulates the impact of extending the coverage of minimum wages on poverty, inequality and the gender pay gap. In one of the most striking results, the paper shows that if all wage-earners were covered by the statelevel minimum wages at existing levels, the earnings of up to 76 million low-paid wageearners – out of about 400 million workers – could be directly affected.