GENEVA - The International Labour Organization (ILO) has signed a new, US$ 94 million agreement with the Government of the Netherlands as part of a wider inter-regional partnership that aims to improve the access of host communities and forcibly displaced people to employment and livelihood opportunities, known as the PROSPECTS Programme.

The world is witnessing the highest levels of displacement ever recorded. In recent years, forced displacement has increased not only in scale but also in complexity. While forcibly displaced persons face specific vulnerabilities, host communities also struggle to pursue their own development efforts in an environment that has been transformed by these large movements of people.

As displacement has become increasingly protracted, responses are becoming more focused on durable solutions to support more dignified, inclusive and comprehensive programmes for refugees and the communities that host them. These responses need to be rapidly consolidated through significant international support built on a foundation of robust and effective partnerships that maximize synergies and make the most of each partner’s strengths.

Launched through an exploratory phase in 2018-2019, the PROSPECTS Partnership initiative is now entering the initial stages of its four-year implementation period (2019-2023). With the generous support of the Government of the Netherlands, PROSPECTS brings together the International Finance Corporation (IFC), the ILO, the United Nations High Commissioner for Refugees (UNHCR), the United Nations Children’s Fund (UNICEF) and the World Bank to support this transformative approach.

The programme operates in eight countries across the Middle East and North Africa (MENA) in Egypt, Iraq, Jordan and Lebanon as well as the East/Horn of Africa in Ethiopia, Kenya, Sudan and Uganda. Grounded on results-based and country-led approaches, PROSPECTS aims to develop and implement evidence-based solutions tailored to each local context, while also testing and learning from innovative, operational solutions to the problems faced by host communities and forcibly displaced people.

ILO’s holistic, gender-responsive and integrated programmes are designed to strengthen labour markets, business development and social protection as well as policy and legislative environments. Interventions are rooted in international labour standards with a strong normative agenda and tripartite approach founded on social dialogue between governments and workers and employers organisations. 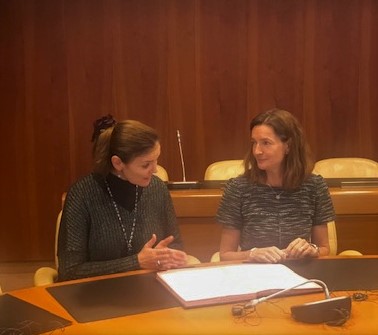 ILO in Africa ILO in the Arab states