NEW YORK (ILO News) - The United Nations General Assembly has unanimously adopted a resolution declaring 2021 as the International Year for the Elimination of Child Labour, and has invited the International Labour Organization to take the lead in its implementation.

The resolution reaffirms member States’ commitments “to take immediate and effective measures to eradicate forced labour, end modern slavery and human trafficking and secure the prohibition and elimination of the worst forms of child labour, including recruitment and use of child soldiers, and by 2025 end child labour in all its forms”. 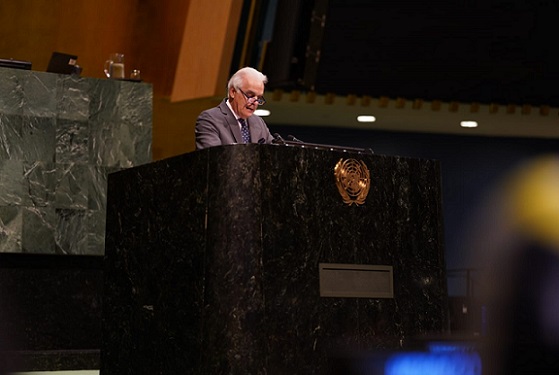 “We hope that this will be one more step to redouble our efforts and our progress to advance, day by day, towards a world in which no child is subjected to child labour or exploitation and a world where decent world for all will be a reality.” - H.E. Mr. Martín García Moritán, Permanent Representative of Argentina to the United Nations

The resolution recognizes the importance of “revitalized global partnerships to ensure the implementation of the 2030 Agenda for Sustainable Development, including the implementation of the goals and targets related to the elimination of child labour”. Among relevant global partnerships is Alliance 8.7, where the ILO serves as the secretariat. Alliance 8.7 is partnership for eradicating forced labour, modern slavery, human trafficking and child labour around the world. Last week, the partnership organized a meeting to accelerate action on the issue and show best practices from Alliance 8.7 Pathfinder Countries.

The ILO has been working for the abolition of child labour throughout its 100 year-history, and one of the first Conventions it adopted was on Minimum Age in Industry, 1919 (No. 5). Substantial progress has been achieved since, largely because of intense advocacy and national mobilization backed by legislative and practical action. Between 2000 and 2016 alone, there was a 38 per cent decrease in child labour globally.

ILO estimates show that in 2016:
• 152 million children between the ages of 5 and 17 were in child labour, almost half them, 73 million, in hazardous child labour.

• Child labour was concentrated primarily in agriculture (71 per cent) – this includes fishing, forestry, livestock herding and aquaculture - 17 per cent in services; and 12 per cent in the Industrial sector, including mining.

“It is so decided!” 🎉 2021 is officially the International Year for the Elimination of Child Labour! 👦🏼🧒🏿👧🏻 Thank you to @ArgentinaUN for leading this and to the 70+ member States for their support. The resolution was unanimously adopted! 🙌🏻 #EliminateChildLabour #Achieve87 pic.twitter.com/mgaP4mVNEn

“The struggle against child labour has gained extraordinary momentum over the past two decades. Yet, 152 million children across the world are still in child labour. We obviously need to scale up action further, and the decision by the General Assembly to declare 2021 the International Year for the Elimination of Child Labour will be a great help in focussing attention on the millions of girls and boys still toiling in the fields, in the mines and in factories.”
- Ms. Beate Andrees, Chief of the ILO’s Fundamentals Principles and Rights at Work Branch.

The resolution will ensure member States’ and other stakeholders’ increased awareness and accelerated actions towards eliminating child labour globally. It is a step towards a more peaceful, prosperous planet, in line with the 2030 Agenda for Sustainable Development.