NEW YORK (ILO News) – Namibia has become the first African country to publicly commit to ratify the landmark ILO Convention on Violence and Harassment (No. 190), adopted this year by the International Labour Conference in Geneva.

“I am proud to announce that Namibia will officially ratify and implement the International Labour Organization’s Convention on Violence and Harassment. This historic Convention will ensure that everyone, especially women, in Namibia are legally protected against violence and abuse of any form in the workplace,” he said.

“The announcement is a significant next step for Namibia, following its active involvement in the negotiations and adoption of the Convention,” said Shauna Olney, Chief of the Gender, Equality and Diversity Branch of the ILO. “Namibia has made it clear that it is ready to take concrete action to ratify and implement the Convention. It is leading the way for others in the region, and globally, to follow suit”.


We are beyond thrilled that Minister @tjekero @NamibiaUN committed to ratify the @ILO Convention on Violence and Harassment! 🙌🏻 Many thanks to @glblctzn for making this a reality! #RatifyC190 #UNGA #PowertheMovement #metoo pic.twitter.com/Nx6qnwIufb

Global Citizen is an online advocacy platform engaging users from around the world to take action on global issues. It gathered over 40,000 signatures calling on world leaders to ratify Convention No 190. The signatures were officially delivered to Guy Ryder, Director-General of the ILO during the United Nations General Assembly.

Every year, Global Citizen gathers Heads of States, the private sector, activists and key leaders to make on-stage commitments and announcements, while also entertaining the 60,000 concert attendees in Central Park, New York, and the millions watching via a live broadcast. This year, Queen with Adam Lambert, One Republic, Alicia Keys and Pharrell Williams were among the headline acts. 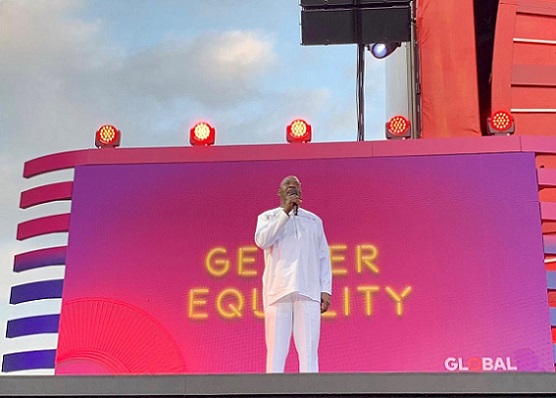