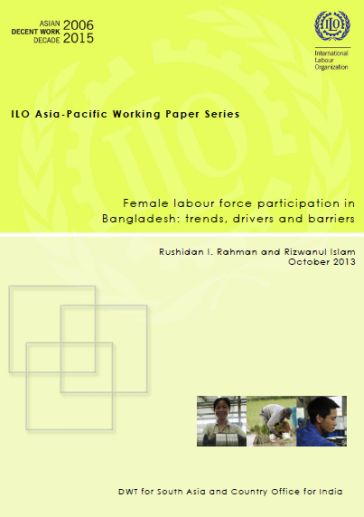 Download:
In contrast to the stylized implications of the U-shaped hypothesis, there has been an increase in female labour force participation in Bangladesh, alongside the acceleration in economic growth since the 1990s. In this regard, Bangladesh has witnessed a substantial increase in female employment in labour-intensive export-oriented industries in urban areas. The study also finds that the rapid expansion of micro-finance in rural areas has supported women’s employment. However, the economy in general and women’s employment in urban areas in particular seem to be too dependent on a single industry. Moreover, issues relating to the level of and gender differential in wages, and other aspects of compliance with labour standards remain. Empirical analysis carried out in the present study indicate that further progress is needed in improving women’s access to education and skill training, productive assets like land and credit beyond microcredit, and services of various government institutions. Improvement is also needed in the social norms and environment that often act as barriers to women’s employment.