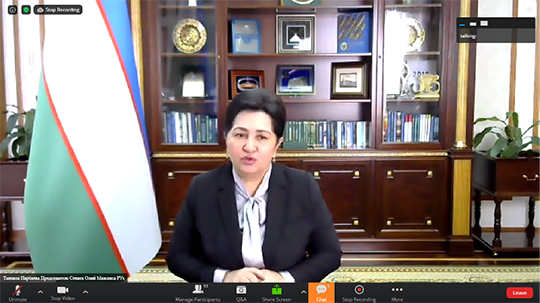 TASHKENT, 8 October 2020 – The preparation of report on Women and Work in Uzbekistan: Towards Gender Equality and Decent Work for All was initiated by Ms. Tanzila Narbaeva, Chair of Oliy Majlis (Senate) of the Republic of Uzbekistan, and developed by the International Labour Organization (ILO) in cooperation with the Ministry of Employment and Labour Relations and the social partners. The report presents significant steps taken by different levels of the Government to promote gender equality, achievements made in education, employment and entrepreneurship policies and social protection, and the role of macroeconomic policies. 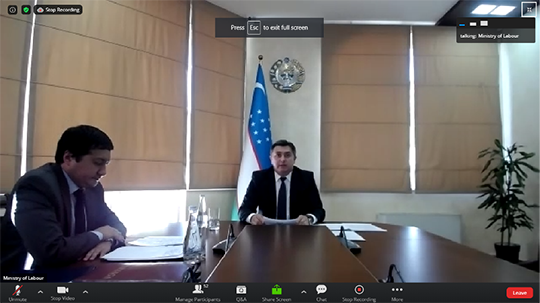 In their opening remarks, Ms. Narbaeva, Chair of Oliy Majlis and Committees on Gender Issues and Forced Labour, thanked the ILO Office for Eastern Europe and Central Asia for its support provided in various development areas. Ms. Narbaeva noted that Uzbekistan has already implemented various initiatives to meet international standards in the area of human rights, decent work and SDGs. However, to achieve gender-equitable socio-economic development it is necessary to improve policies and practice in line with the international labour standards and gender equality norms.

According to Mr. Nozim Khusanov, Minister of Employment and Labour Relations, the new report is part of the roadmap, jointly implemented by the Ministry in cooperation with ILO and social partners. Employment and social protection of women become even more relevant in view of the COVID-19 pandemic. It is necessary to reduce gender gaps in world of work by providing equal access to labour market for women and men and improving maternal and child care.

Ms. Olga Koulaeva, Director of ILO Office for Eastern Europe and Central Asia, thanked Ms. Narbaeva for participation at the meeting and for tireless promotion of gender equality in line with international labour standards and women’s rights mechanisms. She noted a need to more actively integrate the different sets of policies – from the establishment of minimum wage setting mechanisms and collective bargaining that can reduce stubborn gender pay gap to dovetailing macro-economic policies.

Ms. Helena Fraiser, UN Resident Coordinator in Uzbekistan, noted, that comprehensive approach to analysis of the situation of women preparing for, or participating in the world of work in Uzbekistan in many ways binds together these efforts by development and national partners. The data shows that as many as 33 per cent of working-age women are engaged in unpaid care work as main activity, compared with 3 per cent of working age men. Ms. Fraiser noted that the report offers suggestions to overcome this and many other challenges as a next step following significant institutional and policy changes towards gender equality. She expressed hope that women and men in UNCT will work together with women and men of Uzbekistan to achieve the identified as priorities.

Following the presentation of the report by Mr. Mansour Omeira, ILO international expert, the discussion focused on the gender gaps in the world of work, including employment, entrepreneurship and macro-economic policies; and equal remuneration, working conditions and labour governance.

Mr. Erkin Mukhitidinov, First Deputy Minister of Employment and Labour Relations and Ms. Emanuela
Pozzan, ILO’s Senior Specialist on Gender Equality, made concluding remarks and outlined the next steps to be taken.