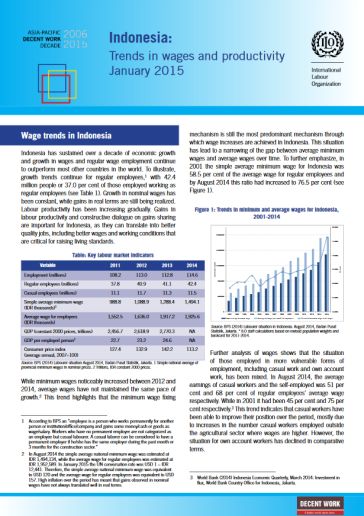 Download:
Labour productivity has been increasing gradually. Gains in labour productivity and constructive dialogue on gains sharing are important for Indonesia, as they can translate into better quality jobs, including better wages and working conditions that are critical for raising living standards. While minimum wages noticeably increased between 2012 and 2014, average wages have not maintained the same pace of growth. This trend highlights that the minimum wage fixing mechanism is still the most predominant mechanism through which wage increases are achieved in Indonesia. This situation has lead to a narrowing of the gap between average minimum wages and average wages over time.