According to the study by Tufts University, the Better Work programme moves factories away from practices leading to long working hours, extremely low pay, dismissal threats, or abuse of probationary contracts. Workers are seeing an increase in their weekly take-home pay and are less and less concerned with excessive overtime and poor wages.

The programme has made significant progress in diminishing coercive labour practices and limiting harassment and verbal abuse. In Jordan reports of sexual harassment fell by 18 per cent and the incidence of workers feeling fearful in the workplace declined markedly as well.

Researchers found that Better Work’s Supervisory Skills Training (SST) is a very effective strategy for improving working conditions, and empowering women in the industry. The analysis showed that production lines overseen by Supervisory Skills-trained female line supervisors increased factory productivity by 22 per cent, when compared to lines overseen by supervisors who had not yet received such training.

The report concludes that these gains in working conditions do not come at the expense of business performance. The research establishes a direct link between better working conditions and higher profit firms. Across all factories tracked in Vietnam, after four years of participation with Better Work, average profitability increased by 25 per cent.

“Evidence of a win-win outcome – improving working conditions while boosting profit margins – has to date largely been anecdotal. Tufts University’s impact assessment has made significant strides in establishing evidence of this relationship,” said Professor Drusilla Brown, lead author of the report

Impact assessment results from Indonesia suggest significant progress has been made, with potential for further improvement. Almost 5,000 worker surveys and 590 management surveys were completed, between 2012 and 2015, in BWI factories. Main highlights, in terms of impact, include: 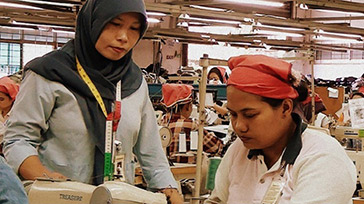