ISLAMABAD (ILO News)- 2.36 to 3.6 million jobs may have been lost and/or disrupted as a result of the worst ever floods in the history of Pakistan that devastated more than 84 districts of Pakistan, the Ministry of Overseas Pakistanis and HRD briefed the media on initial estimates calculated by the ILO.

Mr Sajid Hussain Turi, Minister OPHRD added that productive and labour intensive job creation programmes are urgently needed to lift millions of people out of poverty that has been aggravated by flood damage.

Minister Turi said that the widespread destruction to human lives, houses, livestock, land and other assets, show that the livelihoods of more than 33 millions of people are affected. This includes millions of workers in the informal sector (largely agriculture) and other vulnerable groups including women, persons with disability, youth and elderly.

The initial assessment also shows that Sindh has borne 14.5% of job losses which tops other provinces.

Minister Turi reassured that in the coming days the Ministry along with Provincial Departments of Labour and social partners will chalk out a robust time bound strategy to address issues of workers including immediate employment recovery through rapid infrastructure projects.

Mian Akram, member, Employers Federation of Pakistan said that the floods have had a deep impact on businesses and value chains. While many industries in the provinces were disrupted, agricultural production has been significantly affected leaving agricultural land damaged and unable to cultivate. There was also considerable infrastructure damage in many of the cities and towns across the country, and highwater levels disrupted transportation and timely supply negatively affecting many industries.

Ch Yaseen, General Secretary, Pakistan Workers Federation said that the workers all across the country have been affected, even more so those that are in the informal employment. The loss of income for seasonal workers who will not have the opportunity to earn their livelihoods because of the crops destruction and overall impact on the agriculture is going to contribute to severe increase in poverty rates exposing them to exploitation such as debt labour, child labour, unpaid services among others.

Minister Turi impressed upon the ILO for the need to design rapid rehabilitation programmes focusing on providing decent employment whilst promoting peace and resilience. 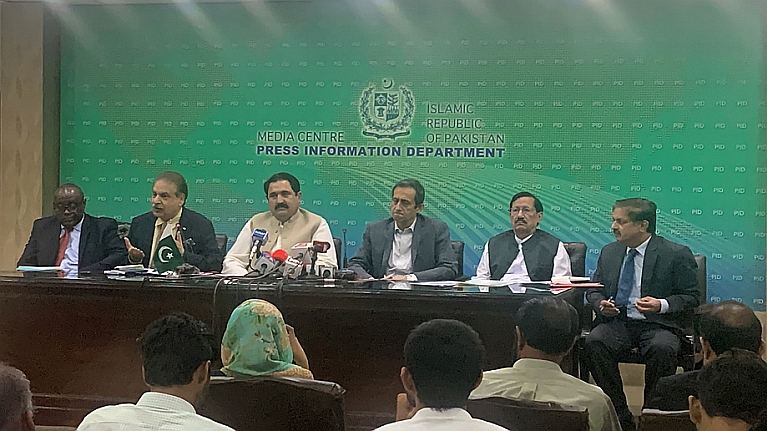 People in Manjhand return to work with the help from ILO