Multan (ILO News): The ILO under its project “Elimination of Child Labour and Forced Labour in the Cotton, Textile and Garment Value Chains: an Integrated Approach” co-funded by the European Union organized a series of capacity building seminars for the cotton communities including women and adolescent girls of Southern Punjab. These awareness-raising seminars were organised with the support of the Pakistan National Textile Leather Garments & General Workers Federation [PNTLGGWF] at 27 remote areas of Southern Punjab during September 2020 – February 2021.

While building on the engagement established in 2020, the project supported the PNTLGGWF to design, develop and implement the pilot awareness-raising initiative on child labour, forced labour and occupational safety and health (OSH) for 215 cotton-picking women and adolescent girls of Southern Punjab. In 2021, the project continued the partnership with the PNTLGGWF, and in total 27 seminars were organized in the remote communities of Khanewal, Sahiwal, Vehari, Muzaffargarh and Multan districts of Southern Punjab and reached 1,526 workers from the cotton value chain, against the target of 1,100. Recognising the all-important role of women in the cotton production, their participation constituted above 90%.

To deliver the consistent and correct messages, the sessions were supported by the pictorial booklet on “Awareness for the cotton-picking women of Southern Punjab on Child Labour, Forced Labour, Occupational Health and Safety and Collective Bargaining” developed in the pilot phase by adapting already existing global materials to the local situation. This booklet proved instrumental for engaging participants with limited educational background. To facilitate, the messages and information the seminars were conducted bilingually using Saraiki and Punjabi languages.

During these seminars, representatives of ILO, PNTLGGWF and local experts had interacted with the audience to improve their understanding around the concepts and issues of child labour, forced labour and OSH, including COVID-19 and protecting children from pesticides.

At the start and end of each event, a simple assessment was administered to understand whether audiences understood the key messages and to gather feedback on the content.

The participants expressed their gratitude towards the ILO, EU and PNTLGGWF for approaching them in their villages, homes and farms. These seminars, besides educating and awareness raising around child labour, forced labour & OSH, provided a platform to share their issues, challenges and discuss possible solutions.

These efforts were complemented by four follow up meetings with local teachers, doctors, religious leaders and participants to build a network of over 100 educated and influential locals to sustain the learnings within these communities. 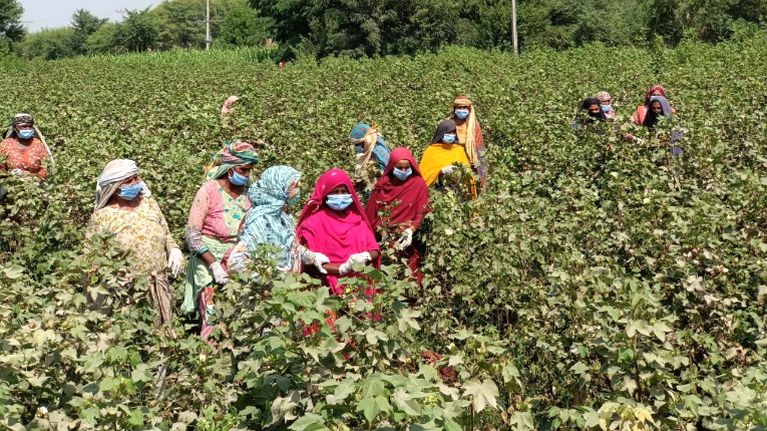 Eliminating child labour and forced labour in the cotton, textile and garment value chains: an integrated approach
Skip to top