ISLAMABAD (ILO News): Building on a legacy of social progress achieved through ILO supported efforts to eliminate child labour from the soccer ball industry in Sialkot, the Pakistan component of the ILO’s MNE Declaration Project implemented in cooperation with the Employers’ Federation of Pakistan (EFP) culminated with a concluding ceremony on 30th April which brought together various stakeholders including ILO’s constituents (Department of Labour, Employers’ and Workers’ Organizations), UN agencies, Diplomatic Missions/Embassies in Islamabad including the Embassy of Japan, Pakistan Olympic Association, academia, civil society, representatives of the sports goods industry from Sialkot and media.

Various speakers graced the occasion and underscore the importance and impact of the project in promoting decent work in the sports goods industry.

The Chief Guest, Mr. Noor Zaman, Senior Joint Secretary from the Ministry of Overseas Pakistanis & Human Resource Development (MOPHRD) noted with satisfaction that the project contributed to the priorities set out under Pakistan’s third Decent Work Country Program. He commended the ILO’s & implementing partners’ role in furthering the decent work agenda in Pakistan through the project.

The Guest of Honour, Mr. Shinichi Honda, Acting Head, Economic & Development Section, Embassy of Japan congratulated stakeholders for successfully completing the project and making the financial assistance from the Japanese government worthwhile. He said that the project had contributed to promoting decent work and had enhanced Pakistan’s profile. He added that the achievements under the project were a starting point for further progress in promotion of decent work in Pakistan. He emphasized the need for stakeholders to work continuously to promote the decent work in Pakistan.

Mr. Majyd Aziz, President, Employers Federation of Pakistan (EFP) said the MNE Declaration project had directly benefited the ILO’s constituents as well as the sports goods industry and its workers. He added that based on the lessons learnt from Sialkot initiative, continuity and replication of the MNED project in other industrial hubs of Pakistan was essential. Mr. Aziz went further to add that one of the most important outcomes of the project was the forged alliance of stakeholders in building a strong business case for socially responsible labour practices and decent work to enhance market access for enterprises in Pakistan.

Mr. Neil Buhne, UN Resident Coordinator said that MNED project was one of the examples of the United Nations role enabling the private sector to adopt human rights based approaches in doing business. He added that implementation and enforcement of international labour standards were important to promote sustainable and responsible business. Mr. Buhne also said that various stakeholders need to continue to collaborate to address decent work issues and improve working conditions in Pakistan.

Ms Ingrid Christensen, Director, ILO Country Office for Pakistan while welcoming the participants, thanked all the partners for their extensive collaboration and cooperation towards success of the project. She expressed her gratitude to the Embassy of Japan in Pakistan for cooperation and the Government of Japan for supporting the project. Ms. Christensen said that hundreds of oversea buyers including multinational enterprises/brands were sourcing their products from thousands of large, medium and small sports goods companies in Sialkot, which were used in high profile events s uch as the football world cup and Olympic Games. She mentioned that efforts in Sialkot would be enhanced in the context of a unique partnership agreement between the 2020 Tokyo Organizing Committee of the Olympic and Paralympic Games and the ILO. 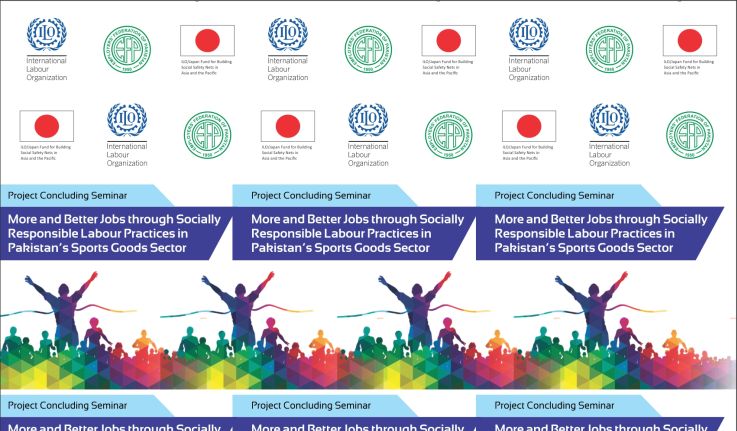