From Wages to Incomes

Income is measured at the household level, as the sum from all different sources accruing over a certain period of time. Figure 7.6 provides an example of a family of four (two adults and two children) with multiple sources of income. Wages are only one of these sources. Other sources include income from self-employment, income from capital and state transfers, such as social security.

In developed countries, wages represent the largest source of income - up to 70 or 80 per cent of total pre-tax and post-transfers income - for households with at least one member in the labour force. In emerging and developing economies, the contribution of wages to household income is smaller, ranging from about 50 to 60 per cent in Argentina or Brazil to about 40 percent in Peru and 30 per cent in Vietnam.

Hence higher wages are one part of the multiple components of a strategy to reduce poverty or inequality. The creation of wage employment (as opposed to other types of employment, like self-employment) and fiscal redistribution through taxes and social transfers also play a key role.

Figure 1. Components of a household income of US$6,500 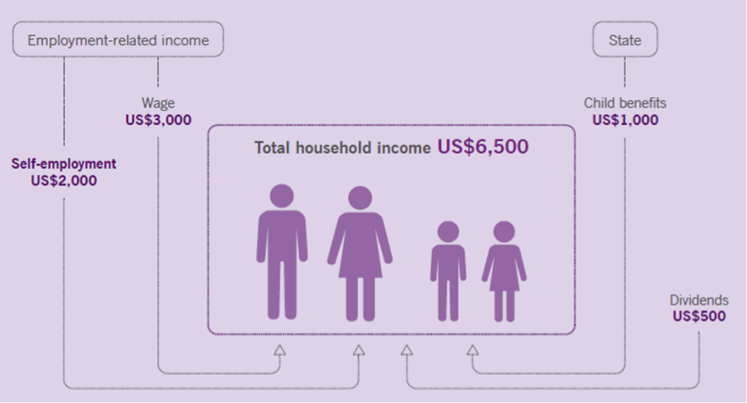 Minimum wages can therefore play a useful role in supporting incomes for those in the lower part of the distribution – even when they do not lift households above an “arbitrary” poverty line. What matters more than the effect on poverty-headcounts, is whether minimum wages improve the lives of low-income households and whether they are better off as a result of it.


1 CBO (Congress of the United States). 2014. The Effects of a Minimum-Wage Increase on Employment and Family Income, February
2 Rycx F. and S. Kampelmann 2012. “Who earns minimum wages in Europe? New evidence based on household surveys”, ETUI, Report 124
3 Belser, P; Rani, U. 2011. “Extending the coverage of minimum wages in India: Simulations from household data.
4 Betcherman (2014, op.cit).

Monitoring the effects of minimum wages