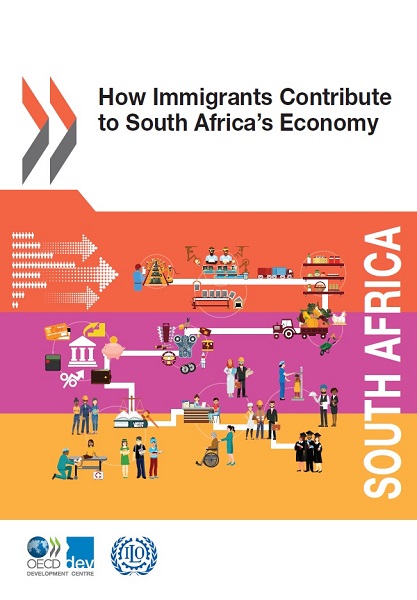 Download:
This joint report by the OECD Development Centre and the International Labour Organisation (ILO) provides an analysis of immigrant workers’ contribution in three areas of the South Africa’s economy: labour markets, economic growth and public finance, and makes recommendations to enhance this contribution.

Based on the sectoral distribution and education of workers in 2010, the contribution of immigrants to GDP that year is about 9%, and immigrant workers can bump the South African income per capita up by up to 5%.

Immigrants also have a positive net impact on the government’s fiscal balance. This is because they tend to pay more taxes. In 2011, the per-capita net fiscal contribution of immigrants ranged between 17% and 27%. Native-born individuals, on the other hand, contributed -8%.

The contribution of immigrants to South Africa’s economy could be further enhanced by:
• Adapting migration policies to labour market needs, requiring effective information systems, not only fed by regular data and information on foreign-born and native-born workers, but linked to institutional arrangements.
• Fighting discrimination. Specific measures to counter discrimination in the labour market and the workplace should be encouraged, with special consideration for the vulnerable position of low-skilled workers.
• Investing in immigrant integration requires a coherent whole-of-government approach, which addresses all dimensions of immigrants’ integration.