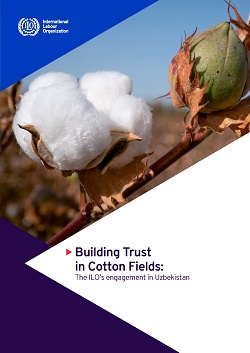 Download:
The cotton harvest in Uzbekistan remains the world’s largest organized seasonal activity of its kind. In 2020 altogether 2 million people, an eighth of the population of Uzbekistan, participated in it, and for most of them it was the only yearly source of cash income. Two thirds were women, and 80 per cent came from rural areas of the country. Over 30 per cent of arable land is still used for cotton production. Although the number of cotton pickers has diminished by nearly a fifth over the past five years, the annual harvest will provide for a significant amount of employment, income and export earnings for a long time to come.

After retracing the history of Uzbekistan and cotton, this monograph describes the tools provided by the ILO’s system of supervising international labour standards and its technical cooperation programmes. It explains how they were put to work to achieve the desired outcome of eliminating child and forced labour in Uzbekistan. The monograph provides a case study of the benefits of cooperation within the multilateral system, a lesson in building a partnership based on trust with a host government and the tripartite constituents through social dialogue, and an example of how to promote the United Nations Sustainable Development Goal of decent work.

Contrary to the experience of many other countries in transition, in Uzbekistan respect for fundamental labour rights at work became a significant part of the reform process. In a remarkably short time-frame, those rights have been confirmed as a motor for economic benefit and for a transition guided by the needs and aspirations of all citizens. Another prominent lesson is that coherent cooperation between international organizations produces real results. One can only hope that the future will show that international labour standards and decent work and social dialogue indeed are essential cornerstones of how a country that is opening up becomes integrated into the world economy.