1. Prior to joining the ILO, what was the nature of your involvement in cooperatives?


I grew up in a small town in Germany where a good number of cooperatives were working. I witnessed how many small-holders of vineyards, mostly farmers, were convinced by a representative of the Raiffeisen Union to form a wine-growers cooperative which became a very successful cooperative enterprise.

In 1955, I began my studies of economics at Marburg University and chose “cooperative science” as a supplementary subject of my studies. After graduation, due to my interest in development questions, I decided to go to Egypt for a period of four months to study the structure and the development of cooperatives in this country. This study became the basis for my Ph.D. dissertation which was subsequently published in the publication series of the Institute of Cooperatives at the Marburg University.

Thereafter I joined the staff of the Institute and later became its Managing Secretary, when the then manager took up an assignment with the ILO as adviser in Burkina Faso. In that period I also became a founding member of a cooperative ‘Marburg Consult’ composed of a number of colleagues working in the field of cooperatives.

Afterwards, I took up a fellowship in Bonn to study Arabic, where I came into contact with Professor Otto Schiller a renowned cooperative and development expert who had worked with the FAO in India and Pakistan. He was just about to take up a position as a university chair at the South Asia Department of the Heidelber University and he hired me as one of the first staff members of the newly established ‘Research Centre for Agrarian Structure and Agricultural Cooperatives in Developing Countries’. During the three years in Heidelberg, between 1964 and 1967, I travelled extensively in North Africa, the Middle East and Israel, to study cooperative developments in these countries and regions. The results of these studies were published in articles and presented at meetings which were regularly organised by the University.

We also undertook research for the German Ministry of Economic Cooperation. In that period, I spent four months along with a colleague to prepare reports on the cooperative movements of Thailand, Malaysia, Iran and Turkey. I was also editing the ‘Journal of Foreign Agriculture’ then, in which we also published articles on cooperative issues.

In 1967, UNRISD and the ILO organised an expert meeting on rural development and cooperatives. I represented our research centre and participated actively in the discussions. At the end of the meeting, both UNRISD and the ILO Cooperative Branch offered me jobs.

2. When and where did you start your career at the ILO?

I joined the Cooperative and Rural Institutions Branch on January 2, 1968 at the P2/3 level. My first main task was to summarize an volumenous study on non-conventional forms of co-operation into a 30 page document that would be submitted to the Committee on Cooperatives. At the meeting I served as an expert. Later on I was involved in the preparation of the proceedings.

In the period leading up to 1971, I concentrated on research and publications on cooperatives. In 1969, I was temporarily detached to UNRISD to contribute to a review of rural cooperation in developing countries. Along with three other researchers I examined the status of cooperatives in different regions. I was responsible for preparing the part on North Africa and the Middle East. A book with our contributions was then published.


3. In 1971, you moved to the ILO’s Regional Office in Bangkok. What are some highlights of your work there on cooperative development?


In the framework of ILO's policy of decentralizing technical work, I decided to take up the post of cooperative and rural development officer at the Bangkok Regional Office in 1971. In this capacity, I was promoted to a P4 level. In my work I got heavily involved in the development and supervision of development cooperation projects in the field of cooperatives. We had a great number of on-going projects in the countries of the region with many experts attached. Emphasis was largely on management and training institutions, but there were also smaller projects concerned with legislation, assisting Government Department dealing with cooperatives.

I represented the ILO at international meetings of the International Cooperative Alliance (ICA), Asian Cooperative Ministers‘ Conferences, and acted as liaison officer with FAO, WFP and non-governmental organisations dealing with cooperatives. I also undertook advisory missions to government institutions and cooperative organisations in almost all the Asian member countries between 1971 and 1974. After a review of my functions by the Personnel Office I was promoted to P5.


4. In 1975, you left Bangkok and came back to Geneva. How did it happen and what are some highlights of your work on cooperatives in the new capacity?


Following the appointment of the Regional Director, S.K. Jain to the post of Deputy Director-General in charge of all technical Departments at Headquarters, he asked for my transfer back to Geneva to serve as his executive assistant and head of his office.
Starting in 1975, I remained in this position for nearly six years which gave me excellent insights into all aspects of ILO's technical work. Thereafter I was nominated Chief of the Basic Industries Branch in the Sectoral Activities Department (SECTOR). The COOP Branch was also located in that Department then. In 1989, I took over the leadership of the Department and thus became Director of the Chief of the COOP Branch. As a result I got closely involved in COOP's activities and also undertook certain representational responsibilities in close cooperation with the Chief of the Branch.


When Mr. Hansenne became Director-General of the ILO in 1989, he initiated a number of organisational changes which also had an effect on my own position. I was entrusted with the task of setting up a new department which would combine all ILO activities concerned with enterprise development, including cooperatives as a specific type of enterprise.

I insisted, despite facing some resistance, that this should also be reflected in the name of the new entity, which became the Enterprise and Cooperative Development Department. As the Director I faced many new challenges and had to familiarise myself with the activities of the Management Development Branch which was also a part of the new Department. During this time I continued to involve myself in the activities of the COOP Branch.


5. You were also involved in the Committee on the Promotion and Advancement of Cooperatives (COPAC). What was your work with COPAC?


Around the time I became the Director of SECTOR in 1989, COPAC was also quite active. In the next few years I served twice as its chairman, including at its meeting in the Philippines where we were received by the President Aquino. After my retirement from the ILO, I was tasked to undertake a review of COPAC and make proposals for its reform in 1996.

6. What happened after your retirement from the ILO?


When I retired from the ILO in October 1995, I left with the feeling that I had helped to keep the cooperative idea on the road map of the ILO where it had started 85 years ago. My involvement with and interest in cooperatives did not end with my retirement from the ILO. As a free-lance consultant I worked in several former socialist countries by helping and advising cooperatives and Goverments in the transition process.

My nomination as Chief Technical Adviser of Cooperative Development in Namibia allowed me a new experience. I headed a project prepared by the ILO and financed by the European Union. This was a challenging task and required for me to work both at the organisational and grassroots levels promoting the cooperative ideas and practices, involving a great deal of training.


7. How do you see the role of cooperatives in the future of work?


For many co-operators all over the world, the ILO is considered a strong supporter of their ideals and activities. I strongly believe that this should continue under the new and changing conditions of work. 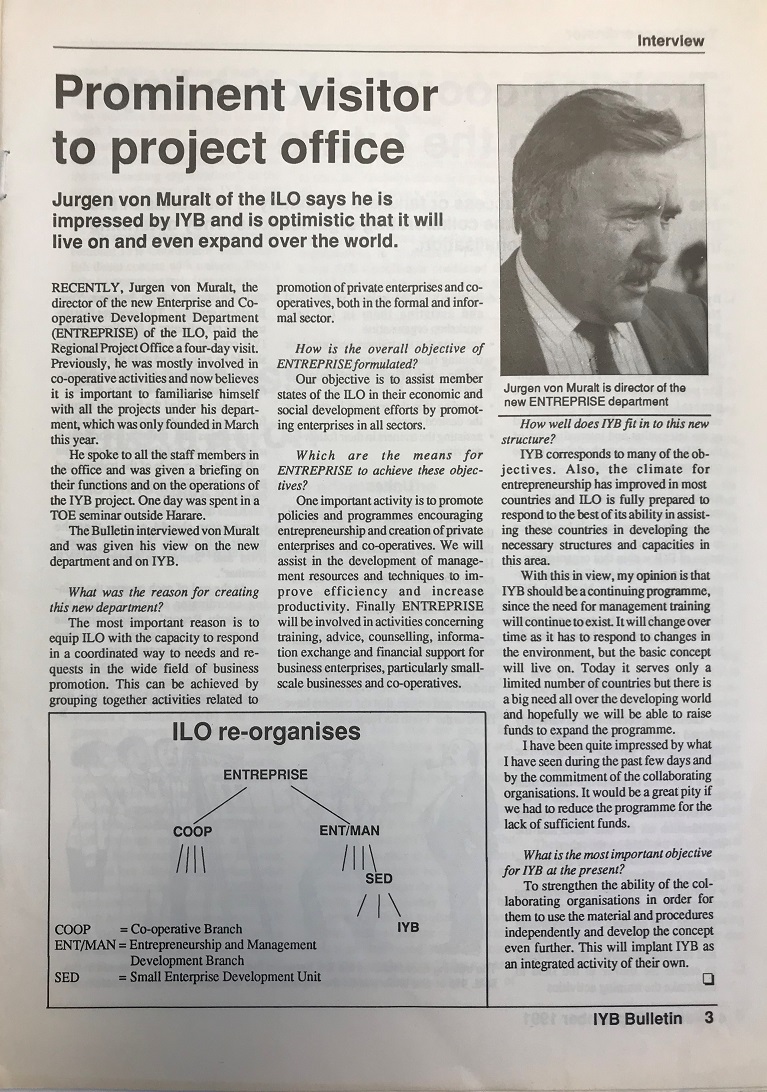