On 14 April 2021, the Government of Malta deposited the instrument of ratification of the Domestic Workers Convention, 2011 (No. 189), becoming the 32nd ILO member State globally to ratify this important Convention, and the 9th country in the European region to do so.

The adoption of Convention No. 189 a decade ago marked an important step toward the realization of decent work for both female and male domestic workers, who are often excluded from protections under general labour legislation. As a result, domestic workers frequently work in conditions of informality in which they are deprived of basic labour rights, such as limits on the length of their workday, the right to rest periods and a weekly period of uninterrupted rest, safe and healthy working conditions, a minimum wage that enables them to meet their basic needs, and access to social protection, including sick leave and maternity protection. The COVID-19 pandemic has exacerbated existing decent work deficits for many domestic workers, particularly migrant domestic workers.

In ratifying Convention No. 189, Malta reaffirms its commitment to the fundamental ILO principles of gender equality and decent work. This ratification also supports measures already taken at national level to protect the rights of domestic workers, including the Domestic Service Wages Council Wage Regulation Order, which establishes conditions of wages and working hours for domestic workers.

On depositing the instrument of ratification, the Hon. Minister Carmelo Abela, Minister in the Office of the Prime Minister of Malta, stated:
“Domestic work is an important source of employment worldwide and although domestic workers are not always visible, their importance in the economy and in society and their contribution to wealth by facilitating the reconciliation of private, family and professional life is beyond dispute. Domestic workers in the EU and in Malta enjoy labour protection, resulting from a culture of active social dialogue. In Malta, domestic workers enjoy the full protection of the Employment and Industrial Relations Act and its subsidiary legislation, specifically the Domestic Service Wage Regulation Order. In this regard, it is an honour to note that the ratification of this important Convention by member states of the ILO sends an important signal as to the aims of the ILO and its Member States in improving labour standards worldwide.”

Upon receiving the instrument of ratification, ILO Director-General Guy Ryder stated:
“Malta’s ratification of Convention No. 189 reaffirms its strong commitment to the ILO’s body of international labour standards. This ratification is also particularly notable as it commemorates the 10th anniversary of the adoption of the Convention, reaffirming the need to ensure recognition and protection of the rights of domestic workers. Domestic work should be recognized as work and labour protections should be extended to all categories of domestic workers, including migrant domestic workers, to ensure safeguards that as the pandemic has shown, are more urgent than ever”. 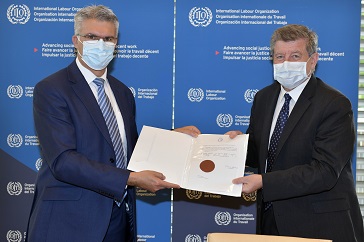