On 30 September 2021, the Government of Germany deposited the instrument of ratification of the Maternity Protection Convention, 2000 (No. 183),

Germany becomes the 40th country to ratify Convention No. 183, the ILO’s most up-to-date and comprehensive standard on maternity protection.

In depositing the instrument of ratification, Ms. Kerstin Griese, Parliamentary State Secretary at the Federal Ministry of Labour and Social Affairs of Germany, stated: “Many women around the world still very much face the reality of discrimination, of violence and harassment based on pregnancy, maternity and their family responsibilities. In ratifying Convention No. 183 Germany is sending a strong signal reaffirming its commitment to fight against discrimination of working women worldwide.”

In receiving the instrument of ratification, Mr. Guy Ryder, Director-General of the ILO, stated: “I welcome the ratification by Germany of Convention No. 183, which sets standards of utmost importance for the achievement of gender equality in the world of work. Strengthening maternity protection in all its dimensions is more than ever needed, in view of the negative impact that the COVID-19 crisis has had on jobs, livelihoods and national health care systems, which have particularly affected women. By promoting the health, safety and well-being of pregnant women, new mothers and newborns, Convention No. 183 contributes to building a better, brighter future. The ongoing commitment of Germany to social protection in these crucial times must be underlined”.

Maternity protection is an area of major concern for the ILO since its foundation in 1919, when the first international convention on the subject was adopted. Safeguarding the health of expectant and nursing mothers, protecting them from job discrimination and ensuring income continuation or replacement during periods of leave is a precondition for achieving genuine equality of opportunity and treatment for men and women at work and enabling workers to raise families in health and security.

These objectives are encompassed in Convention No. 183, which seeks to ensure that the right to work and rights at work of all employed women, including women employed in atypical forms of dependent work, are adequately protected during maternity and beyond. For this purpose, the Convention sets forth a comprehensive approach, encompassing the right of protected women to: medical care; maternity leave; cash benefits to ensure the mother can support herself and her family during leave; protection from unhealthy and unsafe working conditions and environments during pregnancy and nursing ; protection from dismissal and discrimination in employment; and nursing breaks on return to work. Convention No. 183 and its accompanying Recommendation, No. 191, will make the object of the General Survey of the Committee of Experts on the Application of Conventions and Recommendations in 2022, together with the Discrimination (Employment and Occupation) Convention and Recommendation, Nos. 111, and the Workers with Families Responsibilities Convention, No. 156 and Recommendation, No. 165.

Despite significant advances in the extension of protection in many parts of the world, periods of maternity remain marked by vulnerability and insecurity for many working women and their families. According to the recently published ILO’s World Social Protection Report 2020-22, only 44.9 per cent of women with newborns worldwide receive a maternity benefit, a percentage that drops drastically in some regions. Effective and affordable access to maternity health care is still far from universal and unacceptable levels of maternal and newborn mortality rates can be observed in many parts of the world.

Maternity protection is a key component of the transformative policies called for in the 2030 Agenda for Sustainable Development. Ratifying and applying Convention No. 183 can bring countries closer to meeting, notably, SDGs 1 (No poverty), 3 (Good health and well-being), 5 (Gender equality), 8 (Decent work and economic growth) and 10 (Reduced inequalities), and ensure that no woman is left behind.

The Convention will enter into force for Germany on 1st October 2021. To this date, Germany has ratified 86 International Labour Conventions. For further information, see NORMLEX. 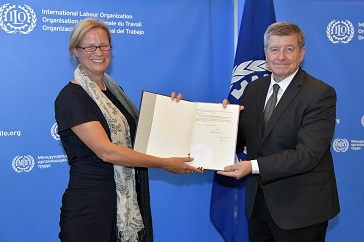