On 23 June 2021, Germany deposited the instrument of ratification of the Indigenous and Tribal Peoples Convention, 1989 (No. 169), becoming the 24th country to ratify this instrument, globally, and the 6th at the European level.

The UN General Assembly and the Human Rights Council regularly call on UN Member states to ratify the Convention. In 2015, the Governing Body of the ILO adopted a Strategy for action, which also seeks to promote and support efforts towards ratification and effective implementation of the Convention.

By ratifying ILO Convention No. 169, Germany supports international efforts to protect, respect and implement the rights of indigenous and tribal peoples and improve their living and working conditions in the countries where they live. Germany’s ratification also constitutes a sign of solidarity with these groups, whose role is crucial for the achievement of the sustainable development goals (SDGs), particularly SDGs10 (reduction of inequalities) and 16 (peace, justice and strong institutions).

On depositing, the instrument of ratification, the Minister of Labour and Social Affairs, Mr. Hubertus Heil, highlighted: “Indigenous peoples, whose very existence is under threat all over the world, are often excluded from the political, economic and cultural life of their countries. With the ratification of Convention 169, Germany is sending a global message, calling on other member states to add authority to Convention 169 by recognizing and ratifying it, too. Germany is thus expressly affirming its commitment to the Convention’s objectives.”

Upon receiving the instrument of ratification, the Director-General of the International Labour Office, Mr. Guy Ryder, welcomed this ratification underlying that “the ILO values very highly Germany’s support for Convention No. 169, which constitutes a framework for governance as well as for a rights-based, inclusive and sustainable development”. He further encouraged other countries to ratify the Convention highlighting the potential that ILO tripartite constituents have in achieving its effective implementation. 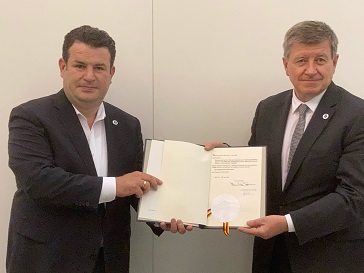