On 21 March 2022, the Government of Malaysia deposited the instrument of ratification of the Protocol of 2014 to the Forced Labour Convention, 1930 with the Director-General of the ILO, thereby becoming the 58th country in the world, and the second ASEAN member State to ratify that Protocol. With this ratification, Malaysia has renewed its commitment to fight against forced labour in all its forms, including human trafficking.

Overwhelmingly adopted during the 2014 International Labour Conference, the Protocol reinforces the international legal framework for combating forced labour. It commits States Parties to take measures to combat forced labour, including trafficking in persons, debt bondage, or forced domestic labour, sanction the perpetrators, and protect victims, including by ensuring their access to justice and effective legal remedies.

According to the latest global estimates, there are still about 25 million people globally who are forced to work under threat or coercion, many of whom are migrant workers. Moreover, many workers, who were particularly hard hit by the economic consequences of the COVID-19 pandemic, have become more vulnerable to becoming trapped into forced labour. In this context, the risk of falling into situations of debt bondage or slavery-like practices should not be overlooked.

In depositing the instrument of ratification, the Honourable Datuk Seri Saravanan, Minister of Human Resources of Malaysia, stated: “This ratification is a testament to our utmost commitment in addressing and eradicating forced labour, which is an infringement of human rights that should not be tolerated. Malaysia has taken various initiatives to address issues related to forced labour, particularly in relation to migrant workers due to their vulnerability and the country’s high reliance on foreign workers in labour intensive sectors and industries. In this regard, the relations between the ILO and Malaysia have undergone significant development as demonstrated by the adoption in 2019 of the Decent Work Country Programme, which outlines the cooperation between our country and the ILO until 2025. Moreover, we have strengthened our collaboration with various stakeholders, including the source countries for migrant workers by way of bilateral agreements. We appreciate the technical support provided by the ILO throughout the process of this ratification, which will pave the way forward in advancing social justice and promoting decent work in our country.”

Receiving the instrument of ratification of the Protocol, Guy Ryder, Director-General of the International Labour Organization, stated: “The ratification by the Government of Malaysia represents an important step that strengthens the measures that have already been taken at the national level to combat forced labour, including human trafficking. The Protocol complements existing ILO standards on the subject by providing a framework to tackle forced labour in the contemporary global economy. This ratification is all the more important since the ILO’s global estimates show the urgency of adopting immediate and effective measures to eradicate forced labour and trafficking. This is also a crucial step towards the achievement of decent work and the delivering at the country-level of the 2030 UN Sustainable Development Goals. I am therefore very pleased to receive this instrument which also reaffirms the continued commitment of Malaysia to respect fundamental principles and rights at work.”

Malaysia is also one of the countries covered by the ILO Bridge Project, an initiative aimed at supporting the development of responsive national policies on forced labour and enhancing efforts to collect reliable national statistics, in collaboration with workers’ and employers’ organizations and other relevant stakeholders. With the assistance of the ILO, Malaysia adopted the National Action Plan on Forced Labour (2021-2025) that focuses on awareness, enforcement, labour migration as well as access to remedies and support services for the victims. In addition, through the TRIANGLE project, the ILO is helping the country to develop labour migration governance frameworks, build the capacity of the Government and social partners, and provide support for services to migrant workers. 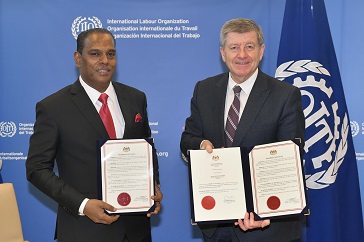