On 22 May 2019, Zimbabwe deposited its instrument of ratification of the Protocol of 2014 to the Forced Labour Convention, 1930, thereby becoming the thirty-second country worldwide to ratify the Protocol. By ratifying the instrument, Zimbabwe is demonstrating its firm commitment to combating forced labour in all its forms.

The Protocol, adopted by an overwhelming majority by the International Labour Conference in 2014, calls on ratifying States to adopt effective measures to combat forced labour, including debt bondage, forced domestic labour or trafficking in persons, and to protect victims and ensure their access to remedies and compensation.

When depositing the instrument of ratification, Ambassador Taonga Mushayavanhu, Permanent Representative of Zimbabwe to the United Nations in Geneva said: “We are proud to be among the first African countries that have ratified the Protocol. Zimbabwe upholds the principles enshrined in the two forced labour conventions, ratified in 1998, and through the ratification of the Protocol, it reaffirms its commitment to eradicate forced labour, modern slavery and human trafficking. It is a very important step in light of the challenges associated with migration the country has been faced with in the southern Africa region”.

On receiving the instrument of ratification, Guy Ryder, Director-General of the International Labour Organization, stated: “I am very pleased to receive this instrument of ratification which once again bears witness to Zimbabwe’s commitment to combat forced labour in all its forms. This ratification is all the more important since the ILO’s global estimates show the urgency of adopting immediate and effective measures to eradicate forced labour and trafficking. It also marks a crucial step towards the objective of 50 ratifications of the Protocol by the end of 2019. The ratification of the Protocol is of special meaning in the year the ILO celebrates its 100th Anniversary, as the Protocol is part of the ILO “One For All Centenary Ratification Campaign” launched by the International Labour Office”.

At the national level, Zimbabwe has been strengthening its legal and institutional framework to combat all forms of forced labour through, in particular, the enactment in 2014 of the Trafficking in Persons Act which covers in its definition sexual exploitation, debt bondage, illegal labour, forced labour, or other forms of servitude. It has also established an Anti-Trafficking Inter-Ministerial Committee and launched the 2016–18 National Plan of Action on Human Trafficking. 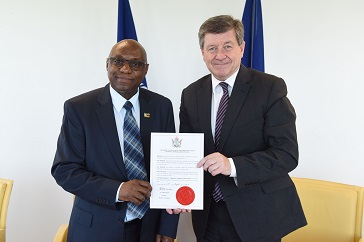