On 28 September 2017, Switzerland deposited the instrument of ratification of the Protocol of 2014 to the Forced Labour Convention, 1930, with the Director-General of the International Labour Organization (ILO), thereby becoming the 20th country to ratify the instrument. The Protocol, adopted by an overwhelming majority by the International Labour Conference in 2014, reinforces the international legal framework for combating all forms of forced labour, including trafficking in persons, and calls on ratifying States to take measures to prevent forced labour, protect victims and ensure their access to remedies and compensation.

When depositing the instrument of ratification, Boris Zürcher, Director of the Directorate of Labour of the Secretariat of State for Economic Affairs (SECO), said: “The Protocol is a turning point in action to combat forced labour throughout the world. It addresses modern forms of forced labour, including trafficking in persons. Switzerland is proud to be associated with action that reaffirms the resolute commitment of governments, employers and workers to achieve the effective and lasting abolition of forced labour.”

Receiving the instrument of ratification, Guy Ryder, Director-General of the ILO, welcomed this renewed manifestation of Switzerland’s commitment to participate in the global movement to bring an end to the scourge of force labour. This ratification is all the more important as it comes a week after the publication of the ILO’s new estimates, according to which there are 24.9 million victims of forced labour throughout the world, including 4.8 million victims of sexual exploitation. It is to be hoped that other countries will follow Switzerland’s example by taking the same step so that we can move forward towards the objective of the “50forfreedom” campaign of 50 ratifications of the Protocol by the end of 2018.

At the national level, Switzerland has continued to reinforce its legislation and institutions to combat trafficking in persons, particularly through the action of the Swiss Coordination Unit against Trafficking in Persons and Smuggling of Migrants (SCOTT), which was established in 2003 to develop strategies and coordinate action in this field. Switzerland has also recently adopted a second National Plan of Action to Combat Trafficking in Persons covering the period 2017-20, which includes 28 measures in the fields of prevention, criminal prosecution, assistance to victims and partnership. 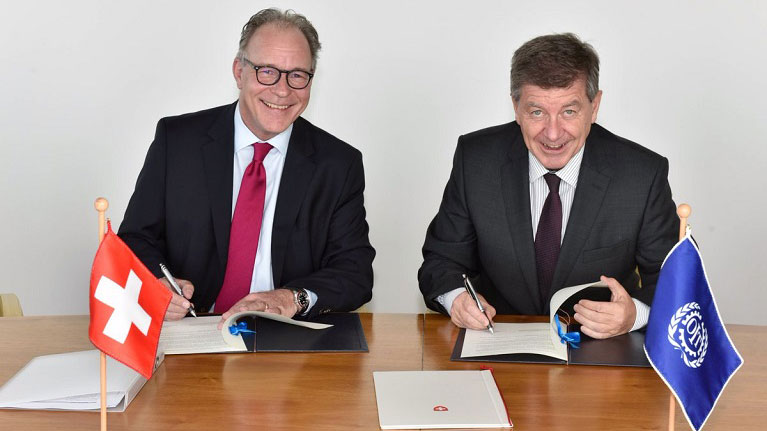