Denmark has deposited the instrument of ratification of the Protocol of 2014 to the Forced Labour Convention, 1930, thereby becoming the seventeenth country to ratify this instrument. Denmark joins the ten other European countries to have ratified the Protocol since it was unanimously adopted by the International Labour Conference in 2014.

Through this ratification, which took place on 14 June 2017, Denmark has made a formal commitment to apply this international instrument, which gives new impetus to action against all forms of forced labour. The Protocol supplements the Forced Labour Convention, (No. 29) 1930. It requires member States to take further steps to prevent forced labour in all its forms, as well as to provide victims with protection and access to effective remedies, including compensation. The ILO estimates that 21 million people are victims of forced labour around the world and that this generates some US$150 billion a year in illicit profits. Victims are exploited in various sectors of the economy, such as agriculture, fishing, domestic work, construction, industry and mining. Forced labour takes different forms, including sexual exploitation, debt bondage and even trafficking in persons and slavery.

On depositing the instrument of ratification, Mr Troels Lund Poulsen, Minister of Employment of Denmark recalled that “Forced labour has no place in a civilized world. It is a severe violation of basic rights and human dignity. This is also the case when forced labour occurs in more modern forms. Today, we see that people by deception are recruited by cynical traffickers to face threats and coercion and to end up in debt and miserable working conditions, often far from their home and relatives. Many of them are even women and children. In Denmark, we have luckily only seen very few cases of forced labour. It is, however, important that we all sign up and give strong support to ILO's important work in this area and thereby bring hope to the many victims of forced labour worldwide of whom there are still too many.”

On receiving the instrument of ratification of the Protocol, ILO Director-General Guy Ryder stated that this ratification was a further testimony to Denmark’s ongoing commitment to promote and implement fundamental rights at work. This ratification brings us one step closer towards reaching the target of the 50forfreedom campaign – 50 ratifications by 2018. This commitment was also visible through the support given by Denmark to finance development assistance to various ILO member States constituents. Denmark has a strong record in combatting forced labour. It was one of the first countries to ratify the Forced Labour Convention, 1930 (No. 29), in 1932, and the Abolition of Forced Labour Convention, 1957 (No. 105), in 1958. Denmark has been engaged in combatting trafficking in persons for a long time. It has developed a strong legal and institutional framework in this area including the establishment in 2002 of an Inter-Ministerial Working Group on Human Trafficking and the adoption of the fourth National Action Plan (NAP) against Trafficking in Human Beings (2015-2018) which covers inter alia: identification and protection of victims, demand reduction and prosecution of traffickers. 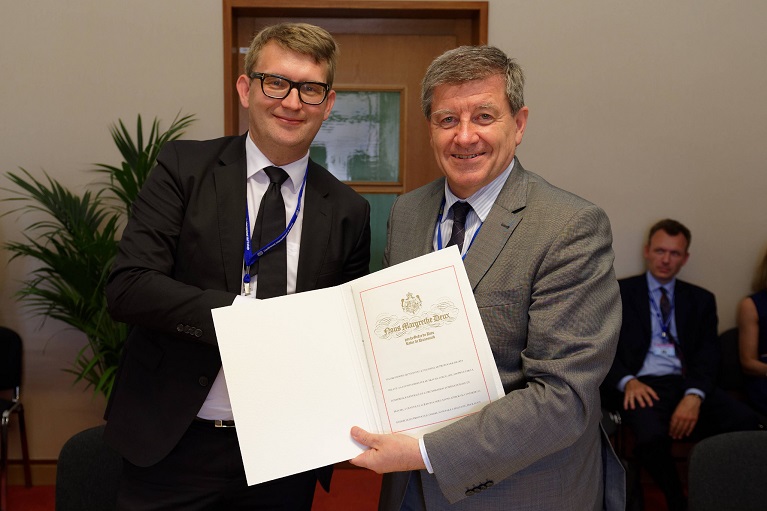