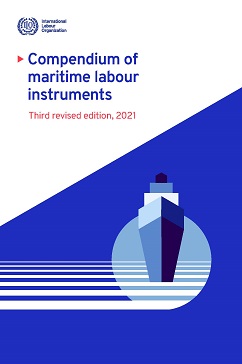 Download:
The Maritime Labour Convention, 2006, as amended (MLC, 2006), a landmark international labour Convention, was adopted by the 94th (Maritime) Session of the International Labour Conference. The MLC, 2006 entered into force on 20 August 2013 and, as of December 2020, has been ratified by 97 countries representing more than 91 per cent of the world gross tonnage of ships. Sometimes called a “bill of rights” for seafarers, it sets out seafarers’ rights to decent conditions of work and helps to establish a level playing field for fair competition for shipowners. The MLC, 2006 was designed as a global legal instrument that has become the “fourth pillar” of the international regulatory regime for quality shipping, complementing the key Conventions of the International Maritime Organization (IMO). The 2014, 2016 and 2018 Amendments to the Convention are also included in this edition.

This compendium, an essential reference source, also includes the Seafarers’ Identity Documents Convention (Revised), 2003, as amended (No. 185), including the 2016 Amendments to its Annexes, the Work in Fishing Convention, 2007 (No. 188) and Recommendation, 2007 (No. 199), and the ILO’s fundamental Conventions.