On 20 April 2021, the Republic of Korea deposited the ratification of 3 fundamental ILO Conventions in a clear demonstration of its commitment to promoting freedom of association and eliminating forced labour.

“I am delighted to welcome the ratification of these 3 fundamental ILO instruments. They demonstrate the conviction of the Korean people – in the words of the ILO Centenary Declaration for the Future of Work – that the continuous and concerted action of governments and representatives of employers and workers is essential to the achievement of social justice, democracy and the promotion of universal and lasting peace” said Ryder.

He highlighted the determination with which the Korean people had fought for the fundamental values that have enabled Korea to raise standards of living in only a few decades: a commitment to pluralist democracy based on the rule of law and the respect of human rights, adherence to open and transparent market economy principles and a shared goal of sustainable development.

“Maturing labour relations based on strong, independent and representative organizations of employers and workers and aimed at delivering decent work for all women and men will only make Korea stronger as it tackles the challenges of our time, whether it is an ageing society, digital transformation of work or an inclusive labour market” Ryder added. “The future is now: institutions of work, including freedom of association, more effective collective bargaining and other social dialogue and eliminating forced labour at home and abroad are essential if the world is to emerge from the pandemic with the means and the resolve to combat widening inequality and promote social justice for all.”

The Korean Minister of Employment and Labor stressed that a milestone had been reached: “Today Korea is ratifying the 3 most important Conventions the ILO has adopted in more than a century of standard-setting. The Korean government will continue its effort to fully guarantee the fundamental labour rights and to establish sound labour-management relations that are based on autonomy and responsibility. Although the global community is facing challenges due to the pandemic, the Korean government is working hard to achieve a human-centred recovery, and it will strive to engage in active cooperation with the ILO to create decent jobs."

With the support from ILO, the Republic of Korea has recently amended labour relations laws, providing the right to organize to teachers, public servants and the unemployed. In 2018, the government and the social partners embraced social dialogue and tripartism with renewed vigour when the Economic, Social and Labour Council (ESLC) succeeded the Tripartite Commission set up 20 years earlier to overcome the foreign exchange crisis with a grand social compromise. The ESLC has been instrumental in generating mutual benefits and fostering solidarity through concessions and compromise, notably by establishing funds to create job opportunities and provide assistance to low-wage workers. In July 2020, the ESCL brokered a Tripartite Agreement for Overcoming the COVID 19 Crisis, focusing on employment retention, sustaining businesses and expanding the social safety net.

At the conclusion of the ceremony, the ILO Director-General thanked President Moon Jae In, the Government of the Republic of Korea and Korea’s workers and employers for their “commitment to the rights of working men and women in particularly difficult times and to reinforcing multilateralism.”

The three Conventions will enter into force in the Republic of Korea on 20 April 2022. 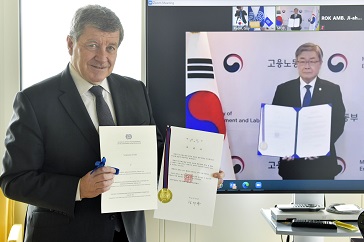