The Government of Mexico deposited the formal instrument of ratification of the Domestic Workers Convention, 2011 (No. 189) with the International Labour Office (ILO) on 3 July 2020.

This makes Mexico the thirtieth member State of the ILO and the seventeenth member State in the Americas to ratify the Convention. With this Convention, Mexico has ratified 81 international labour conventions.

The ILO estimates that there are more than 67 million domestic workers in the world. In many countries these workers are excluded from the protections set out in national labour legislation, as well as from access to social security and health services, including maternity protection.

Convention No. 189 explicitly recognizes that domestic work is work and provides that states should extend the same rights to domestic workers as those enjoyed by other workers.

The ratification of Convention No. 189 represents a milestone for Mexico that supports a series of measures that the country has taken in recent years to recognize domestic work and make it more visible, and to promote decent work for domestic workers. These measures include the programme launched in 2019 by the Ministry of Labour and Social Security (STPS) and the Mexican Social Security Institute (IMSS) to ensure the application of social security to domestic workers.

In a virtual ceremony at which the formal instrument of ratification was transmitted by the Mexican Ministry of Labour and Social Security, Luisa María Alcalde stated that:

"Ratification is not the end, but the beginning of joint work between government, employers and, of course, workers. I want to highlight the role of the workers and civil society who have been fundamental parts of this process."

"We will not lower our guard. We must continue to make progress in promoting and defending these rights. The Ministry of Labor and Social Welfare endorses its commitment to continue dignifying employment, and we know that we count on the International Labour Organization to achieve this task", she added.

For her part, the Undersecretary for Multilateral Affairs and Human Rights of the Mexican Ministry of Foreign Affairs indicated that "with Convention No. 189, our country is endorsing its commitment to the standards of the ILO and to multilateralism, and is making clear its renewed foreign policy on human rights and its recently launched feminist foreign policy”.

"By ratifying this Convention, the Mexican State endorses its commitment to settle this debt with concrete actions in favour of women and girls, the majority of whom are migrants, indigenous or face conditions of vulnerability. Their contribution to the country's economy and to the well-being of families and society as a whole is fundamental and is finally recognized".

The Director-General, Mr. Guy Ryder, upon receiving virtually the instrument of ratification of Convention No. 189 by Mexico, stated:

"The objective of Convention No. 189 is to improve living and working conditions for the millions of domestic workers throughout the world, guaranteeing them a decent job that provides them with protections equivalent to those enjoyed by other workers. Domestic workers are among the most precarious and most poorly paid workers. They frequently work in conditions of informality in which they are deprived of basic rights, such as limits on the length of the work day, the right to rest periods, a minimum wage that enables them to meet their basic needs, and access to social protection, including maternity protection. The decision of the Government of Mexico to ratify Convention No. 189 confirms its willingness to extend basic rights to all workers and reinforces the measures already taken at the national level".

"Finally, recognizing the importance of Mexico in the Americas region, as well as at the international level, it is hoped that the ratification of Convention No. 189 encourages other countries to join the growing coalition of States that are taking effective measures to protect the rights of domestic workers with a view to ensuring that these workers can enjoy decent work in conditions of dignity," added the Director-General. 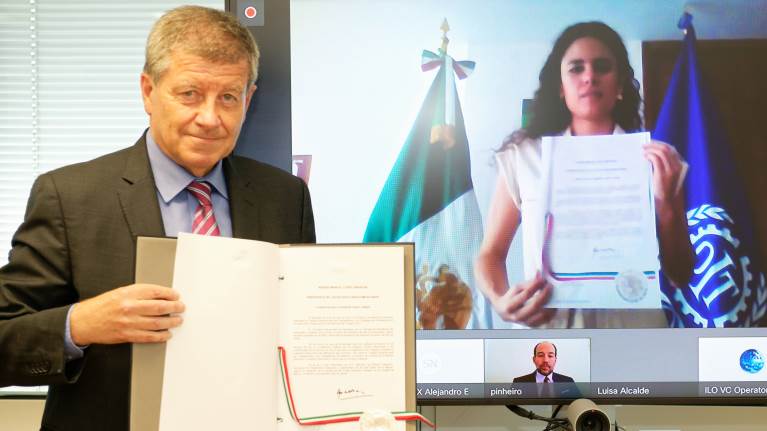