When receiving the instrument of ratification, Mr Guy Ryder, Director-General of the ILO, stated: “I welcome Malawi’s formal commitment to improving occupational safety and health in a continuous and sustainable manner, in consultation with the social partners. These ratifications marks the first OSH instruments ratified by Malawi since 1965. The ratification of Conventions Nos 155 and 187, key OSH Conventions, constitutes a major step towards the advancement of occupational safety and health in the country. Convention No. 184, which focuses on strengthening OSH preventive and protective measures in the agricultural sector, is particularly relevant in light of the large agricultural sector engaged in the country. Through its ratification of the Forced Labour Protocol, Malawi is also reinforcing its formal commitment to eliminating all forms of forced or compulsory labour including trafficking in persons.”

The promotion of decent, safe and healthy working conditions and environment has been a constant objective of ILO action since its foundation in 1919. This importance is reaffirmed in the ILO Centenary Declaration for the Future of Work unanimously adopted at this year’s International Labour Conference, which declared that safe and healthy working conditions are fundamental to decent work. The Declaration calls upon all Members, through social dialogue and with the support of the ILO, to strengthen the institutions of work to ensure adequate protection of all workers, recognizing the extent of informality. Ratification and effective application of the international labour standards are fundamental tools for achieving the goals set forth under the Declaration.

Convention No. 155 provides for the adoption of a coherent national OSH policy, as well as action to be taken by governments and within enterprises to promote occupational safety and health and to improve working conditions. Convention No. 187 calls on member States to take specific measures, in consultation with the social partners, towards the progressive achievement of a safe and healthy working environment through the development of a national policy, a national system and a national programme on occupational safety and health. Convention No. 187 also recognizes the importance of developing support mechanisms for a progressive improvement of OSH conditions in micro-enterprises, in SMEs and in the informal economy. According to ILO statistics, the share of informal employment in total employment in Malawi is more than 80 per cent and the level of informality goes beyond 90 per cent in agriculture. Convention No. 184 aims to provide agricultural workers with the rights and level of protection similar to workers in other sectors, regardless of their employment status. Malawi’s ratification of Convention No. 184 is an indispensable milestone for building and strengthening a preventative safety and health culture in the agriculture sector. Together with the Labour Inspection Convention, 1947 (No. 81) and the Labour Inspection (Agriculture) Convention, 1969 (No. 129) (ratified by Malawi) which support the application of the international labour standards, these newly-ratified OSH instruments will contribute to the creation of an enabling environment for strengthening OSH protection for all workers, including those who work in the informal economy.

Through its ratification of the 2014 Protocol, Malawi becomes the 42nd country worldwide to ratify this important instrument, which reinforces the international legal framework for eliminating all forms of forced or compulsory labour, including trafficking in persons. According to the ILO, a total of 24.9 million people worldwide are victims of forced labour. The Forced Labour Protocol requires ratifying States to take appropriate steps to prevent all forms of forced labour, including trafficking in persons, to protect victims and guarantee them access to effective remedies and compensation. In this regard, at the national level, the Government of Malawi has made significant efforts to combat trafficking in persons, by adopting the Trafficking in Persons Act in 2015 and the establishment of the National Coordination Committee against Trafficking in Persons. The Government has also taken measures to provide assistance to victims of trafficking, including through the establishment in various police stations of Victim Support Units. These Units provide temporary shelter to victims of trafficking prior to and during court hearings.

To date, Malawi has ratified 28 Conventions. 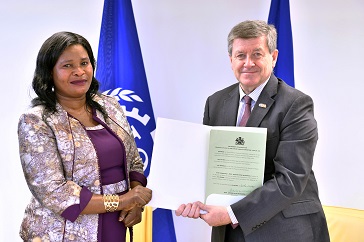