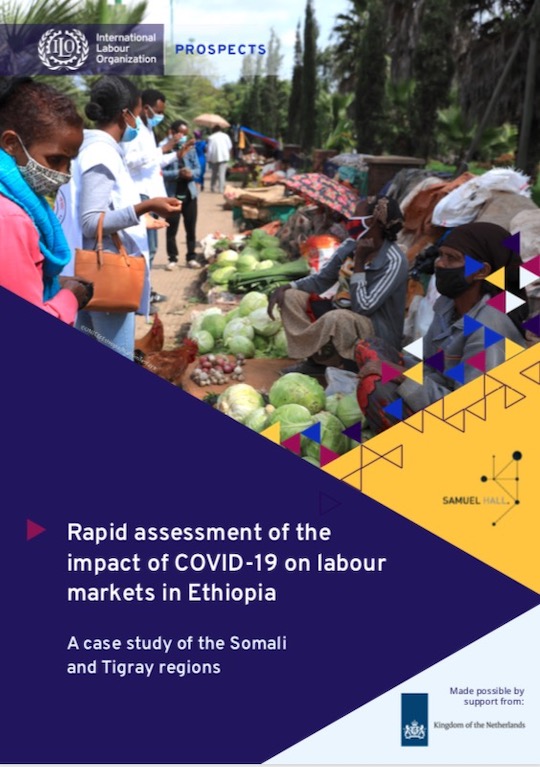 Download:
The Somali and Tigray regional states of Ethiopia are among the country’s main regions where refugees have sought shelter.

Located at the border with Somalia and Somaliland, the Somali region has received a large influx of refugees since the early 1990s as the result of ongoing conflict and natural disasters (notably drought) affecting neighbouring countries, and welcomes as of 30 September 2020 a total of 199,945 refugees, making it the country’s second-largest refugee hosting region. The protracted situation of Somali refugees in Ethiopia, together with the deep historical and socio-cultural ties they entertain with host community members, has facilitated the integration of refugees among the local host communities. The Somali regional state is also host to the Qoloji refugee camp, known to be the country’s largest displacement site with 78,000 internally displaced Ethiopians who have been chased out of the Oromia region owing to inter-ethnic tensions.

The Tigray region, on the other hand, has registered as of 30 September 2020 96,223 refugees, predominantly of Eritrean nationality, settled across four camps. Just like Somali refugees, Eritrean refugees also suffer from protracted exile, as many of them fled their country in the 1990s to avoid conscription in the national service programme. The military service’s indefinite duration and its reputation for endorsing slavery-like practices have pushed many to consider migration as their only exit option.

At the same time, the Somali and Tigray regions face various socio-economic challenges that undermine the livelihoods of both host communities and refugees. High unemployment levels, limited natural resources, and the predominance of subsistence-based, informal activities among hosts and refugees, as they mainly rely on agro-pastoral production, characterize the Somali region’s socio-economic fabric. Nonetheless, owing to the strong social cohesion between refugees and hosts, refugee markets are well integrated, and refugee enterprises can tap into the consumer base constituted by local host communities to further expand and create new business opportunities.

The Tigray region’s economy is also largely based on agriculture and subsistence farming, with three out of four Tigrayans living in rural areas. This high dependency on agriculture, together with poor infrastructure and limited resilience capacities, puts the region at risk of external shocks, such as adverse climate-related events. With their fragile labour markets and the enduring pressure from hosting large refugee populations for protracted periods, the Somali and Tigray regions are ill-prepared for dealing with the economic consequences of a health crisis of unprecedented magnitude