This story was written by the ILO Newsroom For official ILO statements and speeches, please visit our “Statements and Speeches” section.
GENEVA (ILO News) – The informal economy is huge: it absorbs more than half of the global workforce and includes more than 90 per cent of small and medium sized enterprises – a number that does not take into account a myriad of micro-enterprises in developing countries.

As a result, millions of workers and economic units around the world suffer from poor working conditions and a lack of rights at work. Low quality employment, inadequate social protection, poor governance and low productivity are some of the obstacles that workers and enterprises face when caught in the informality trap.

That’s why the new international labour standard that was adopted by the 104th International Labour Conference was labelled as historic. Because it offers for the first time guidance to member States on how to facilitate transition from informality to the formal economy.

The aim of the new labour standard is three-fold: to facilitate the transition of workers and economic units from the informal to the formal economy, to promote the creation of enterprises and decent jobs in the formal economy, and to prevent the informalization of formal jobs.
“It is not just about adopting a new Recommendation, it’s actually putting it into practice that will matter,” explains Azita Berar-Awad, Director of the ILO’s Employment Policy Department. “There are many examples of good practice around the world who lead the way out of informality.”

The FORLAC programme launched by the ILO Regional Office for Latin America and the Caribbean provides a wealth of analytical work and evidence-based policy recommendations and guidelines on facilitating the transition from the informal to the formal economy.

In Uruguay, the social security administration and the tax collection authority decided to team up to establish a simplified and unified collection scheme for small contributors called Monotax (“Monotributo”). People covered by the scheme are entitled to the same social security benefits as workers in the formal economy.

Brazil, where a national integrated policy framework has been adopted to combat poverty, offers an example of a rapidly formalizing country. Over the past decade, job creation in the formal economy has been three times as rapid as in the informal economy. What’s more, innovative public policies were effective in targeting hard-to-reach groups such as own-account workers and micro and small enterprises, to facilitate their transition to the formal economy.

ILO activities in the Philippines are a good example of a possible transition to the formal economy. They not only brought much-needed income to typhoon victims, but also a guaranteed minimum wage, social protection and safety and health – each being an important step on the way to formality and decent work.

One of the positive changes for workers transitioning from the informal to the formal economy is access to social protection. Many good practices are available now on extending or improving the coverage of specific categories of workers such as own account workers, homeworkers and domestic workers.

The Self Employed Women’s Association (SEWA) in India is a successful initiative to organize and empower poor women in the informal economy. As a union, cooperative and women’s movement, SEWA provides a wide range of services, including training, assistance in establishing cooperatives, and financial, insurance and social security services. The SEWA model has inspired other initiatives, not only in Asia, but also in South Africa and Turkey.

The 12 guiding principles in the new ILO standard have been inspired by these and many other successful country good practices and experiences.

”Isolated approaches which address only one aspect of informality usually have limited results. Successful country experiences in tackling informality were based on an integrated approach. The Recommendation builds on the lessons learnt from these successful strategies, provides policy guidelines to help formulating and implementing an integrated policy framework to facilitate the transition to formality, and ensure that the framework is included in national development strategies,” concludes Azita Berar-Awad. 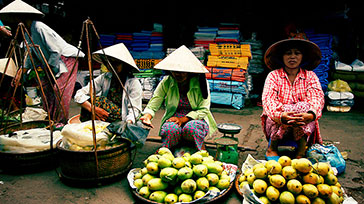