This story was written by the ILO Newsroom For official ILO statements and speeches, please visit our “Statements and Speeches” section.
GENEVA (ILO News) – Unemployment in Spain is rising faster in rural areas than in urban centres and is fuelling social unrest, according to the latest statistics produced by ILO’s International Institute for Labour Studies (IILS).

Unemployment in rural areas jumped from little over 8 per cent in 2007 to more than 26 per cent in 2012, while in urban areas it increased slightly less, from 7.8 per cent to 24 per cent over the same period. The national average is just under 25 per cent.

“The situation is particularly hard in the southern region of Andalucía, which already had high unemployment rates before the crisis. For example, in the provinces of Almería, Jaén and Granada, more than one-third of workers are unemployed,” said Steven Tobin, senior economist at the IILS.

This is well above the unemployment rates in Madrid and Barcelona, where less than 22 per cent of the population does not have a job.

“The secret is the production model”

The situation is not the same across all rural Spain. There are regions – like Navarra and Cantabria in the north – where unemployment is much lower than the national average.

This means the crisis is making the North-South divide more evident and maybe even fuelling it.

“The secret is in the production model,” said Joaquín Nieto, head of the ILO Madrid Office. “ Regions that are the hardest hit are those in which the real estate boom and the speculation bubble have been higher. By contrast, unemployment is lower in regions that were less affected by the housing bubble” he added.

Also, rural employment in Spain has gone through deep structural changes, as migrant workers have been increasingly turning to paid employment in agriculture over the last fifteen years.

The growing sense of dissatisfaction with anti-crisis measures has led to different types of protest. Union mobilizations have seen millions of people taking to the streets in major cities. Although the “Indignados” movement first started in urban areas, social unrest has now spread to a number of rural areas, especially in Andalucía.

Protests range from symbolically occupying land to organizing food raids in supermarkets. Protest leaders told the media that this was not robbery but a legitimate action since it was about distributing food to the needy.

The rise in the number of protests in rural areas of Spain is consistent with the IILS social unrest index for Spain, which shows a steady increase between 2006 and 2011 and a main surge in 2009. 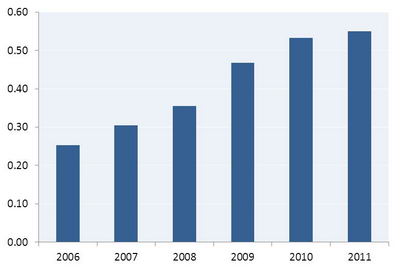 “As we highlighted in a recent report on the Eurozone job crisis, austerity measures have failed to boost the economy and job creation – and have done little to improve public finances. The case of Spain shows that a growth and employment strategy is needed,“ said IILS director Raymond Torres.

According to Torres, the challenge for Spain is to make a shift towards a new, more balanced economic growth model which will rely more on export-oriented growth and quality jobs.

“This is no easy task and will take time. But Spain’s own experience of earlier crises shows that, with sufficient political determination and with the involvement of social partners, it can be done,“ concluded Torres.