This story was written by the ILO Newsroom For official ILO statements and speeches, please visit our “Statements and Speeches” section.
MASERU, Lesotho (ILO News) – When 31-year-old Mamontseng Habahaba was pregnant with her third child, the quality control inspector at one of Lesotho’s 39 garment factories did not bother telling her supervisor. She figured she would just work until it was time to give birth, unaware of her rights as a pregnant factory worker.

“Habahaba’s situation repeats itself at other apparel factories where pregnant workers face losing out on benefits entitled to them and rights that protect them in the workplace before and after giving birth. The issue is critical, not just in Lesotho, but across the world, where a majority of factory workers are of child-bearing age,” says Kristina Kurths, Programme Manager of Better Work in Lesotho.

“With the majority of garment workers being young women, maternity rights at work are of great importance. In Lesotho, Better Work is striving to ensure that the needs and rights of pregnant workers are being met.”


In Lesotho, Better Work is striving to ensure that the needs and rights of pregnant workers are being met."

Better Work Lesotho helps protect pregnant workers by offering maternity protection training as part of its Workers’ Life Skills Programme. Under this new initiative, human resource managers of factories are trained to understand and observe the law, and also train Peer Educators who in turn instructing their co-workers on maternity health issues.

“We learned that awareness regarding the rights and needs of pregnant workers remains low. In a number of factories, workers were not aware of the change in the law which increased paid maternity leave from two to six weeks. Pregnant workers are not always being accommodated at their jobs with lighter work loads, and are often not aware of the health and safety risks at their workplace that could harm their unborn child,” explains Kurths.

What’s more, many workers report for duty one month after giving birth, worried about losing income by being home with their babies.

Habahaba stayed with her baby for two months, though is now feeling the pinch of lost income. Her monthly earnings of 1080 Lesotho Lotis (about US$ 80 ) get chiseled away each month with the nanny she hired to care for her baby and her first child, while another M150 goes towards paying the rent, leaving a slim margin for Habahaba and her husband to cover food costs and other bills.

“Maternity protection in the apparel industry workplace has been a long neglected topic.. We are working together with our partners – unions, employers and the government to strengthen the law and promote compliance with it. The Programme is a first step to creating decent work in Lesotho’s key industry which is part of the global garment supply chain,” concludes Kurths. 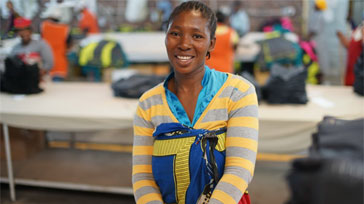