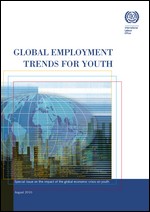 Download:
This report is the fourth in the series, with previous editions produced in 2004, 2006 and 2008. As in the previous reports, it incorporates the most recent labour market information available to explore the theme of the vulnerabilities of youth to unemployment and decent work deficits, showing where progress has or has not been made in absorbing the energy, talent and creativity of young people into the productive potential of the economy. Chapter 2 updates the world and regional youth labour market indicators and provides detailed analyses of the longer-term trends in youth population, labour force, employment and unemployment, and provides a first glimpse at new estimates of working poverty among youth.

The Global Employment Trends for Youth, August 2010 remains unique, however, as the only report in the series to be written in the midst of a global economic crisis. As such, it inevitably addresses the impact of the crisis on young men and women around the world. The impact on young people is defined and placed in a broader context in terms of comparisons among regions, between sexes and among other age cohorts (namely, that of adults). Chapter 3 explores the question of whether young men and women, already defined as a group with serious vulnerabilities even at the best of times, can become even more vulnerable during times of economic shocks. It looks at where the crisis impact is being felt the hardest in terms of youth employment and unemployment and where the impact is showing up more indirectly in view of longer-term development prospects. Finally, Chapter 4 looks at some lessons learned from evaluated youth employment programmes. Ideally, such lessons can help to shape future developments as countries continue to prioritize youth in their national recovery policy agendas.