Fifty-year old Esakkimuthu Selvakumar returned to his village, Keppapilavu, located in the Mullaitivu district in the Northern Province of Sri Lanka after 9 years. He was among the countless who were displaced by the 30-year old conflict, in 2009 an injury during the war also resulted in Selvakumar losing his left leg. Before the displacement, agriculture was the family’s primary source of livelihood, but until the resettlement Selvakumar and his wife Ragini were forced to engage in odd jobs to provide for their family. At present, they earn their daily income from the 2 acre of agricultural land that was previously controlled by the military; nearly 1500 acres of such land has been gradually released for resettlement and agriculture activities to returnee communities in the Keppapilavu and Puliyammunai villages. 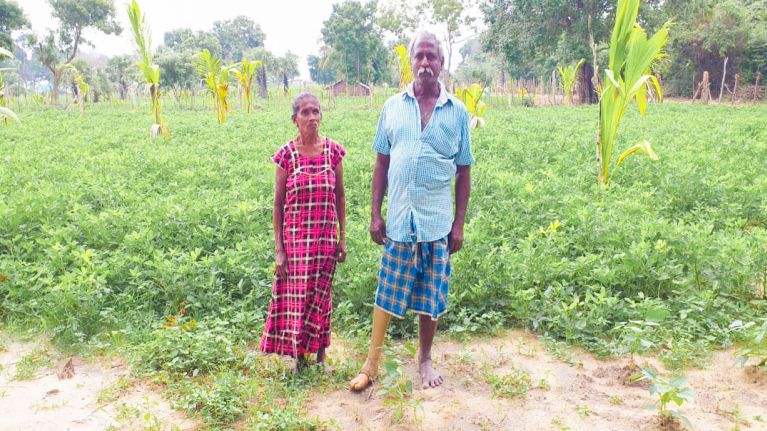 From among the returnee communities, nearly 60 families were able to start cultivation using their own financial and other resources. However, many of the most vulnerable groups, including Female Headed Households (FHH), and Persons With Disabilities (PWDs) were facing tremendous difficulties due to lack of resources and in kind support to commence agriculture activities. This included, cultivation being restricted to only one season a year due to water scarcity, limitations in accessing extension services such as quality seeds, technical advice and information about best practices, along with difficulties in accessing national markets. Reintegration also brought with it its own challenges for returnee communities.

35-year-old Archchunan Vanitha is another recent returnee to the Keppapilavu Village. Vanitha lost her hands during the war.  Her husband works as a daily labourer to support their family of three. Though Vanitha had access to a small piece of land owned by a relative, the family lacked the resources to start any sort of cultivation on their own and supplement the household income.

Selvakumar and Vanitha are among the 300 returnee residents directly supported by the US State Department funded, Sustainable Resettlement and Reconciliation (SURAR) project, implemented by the ILO in the Kilinochchi, Mullaitivu and Jaffna districts. Increasing income generation opportunities and facilitating reintegration and reconciliation for resettled communities are among the key focus areas of the project.

As part of its activities, SURAR conducted an economic resource mapping to identify sectors with potential to create employment opportunities for resettled communities in Mullaitivu, the findings of which indicated high viability for groundnut cultivation. Based on this, the project began collaboration with the Farmers Organization –Chemmalai (FOC) in early 2020, through which it is supporting resettled farmers including 60 Female heads of households, 30 vulnerable youth, and 20 women to engage in groundnut cultivation.

“Through FOC I received groundnut seeds, as well as technical training on cultivation practices and adopting new technology to improve my harvest. The project is also going to be supporting the construction of a shared agro-well, which will resolve the water scarcity issue we face, allowing me to continue agriculture activities during both seasons. This means, I can harvest almost 1,200kgs of groundnut from my 2-acre land, eventually I hope to increase this to 1,600kgs”says Selvakumar. 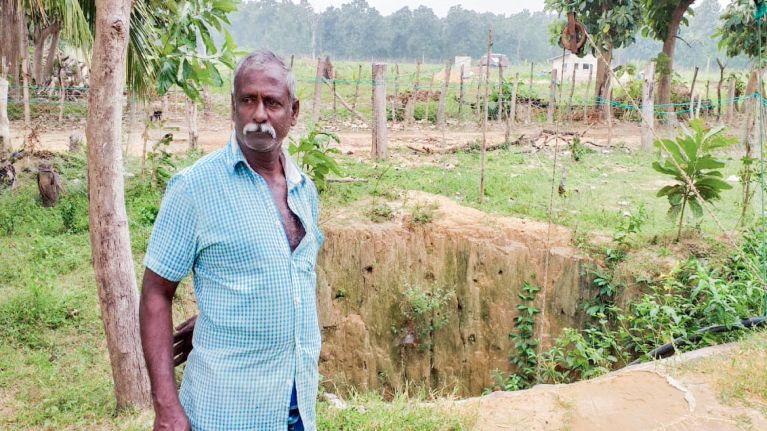 Construction of agro-wells will help farmers continue groundnut cultivation all year-round, allowing for continued income, says Selvakumar as he stands next to the excavation site for a well.

Vanitha echoes Selvakumar’s thoughts. “In addition to groundnut seeds, as well as technical training sessions, we also received additional support in preparing the land and in labour wages. I have cultivated half an acre and hope to harvest about 300kgs of groundnut.”

The project also has been strengthening market linkages through private sector partnerships, and is already working with FOC in this regard. David Gram; a leading manufacturer was identified as potential partner. Through such private sector linkages, SURAR hopes to provide farmers with support in post-harvest processes, storage facilities, extension facilities, access to markets, rebuilding agriculture infrastructure including a groundnut-processing factory, and better prices for the harvest. The benefits of such interventions extend beyond just the 300 direct beneficiaries of the SURAR project, positively influencing the livelihoods of all those engaged in groundnut cultivation in the area, as well as pushing the sector forward.

“Even though I am not a direct beneficiary of the project, I was able to get technical advice and knowledge of best-practices from neighbouring farmers who are direct beneficiaries. I also take advantage of the improved extension services at the Agriculture Department to better my cultivation practices to get a good yield. With David Gram operating in our area, farmers like me also have an easier access to market, and once the irrigation challenges are addressed by the project, we can all cultivate groundnut throughout the year,” says Immanuel Dominic Joseph, a member of FOC.

In addition to collaborating with FOC, SURAR assisted groundnut farmers to form a cooperative society, enabling them to not only support each other, but also increase their collective bargaining power, and market their produce, bypassing intermediaries. The Cooperative structures are vital to integrating returnee communities with the host communities in the area, which ILO is facilitating. Successful integration has resulted in many returnees being supported by the host communities to carry out their agricultural activities. 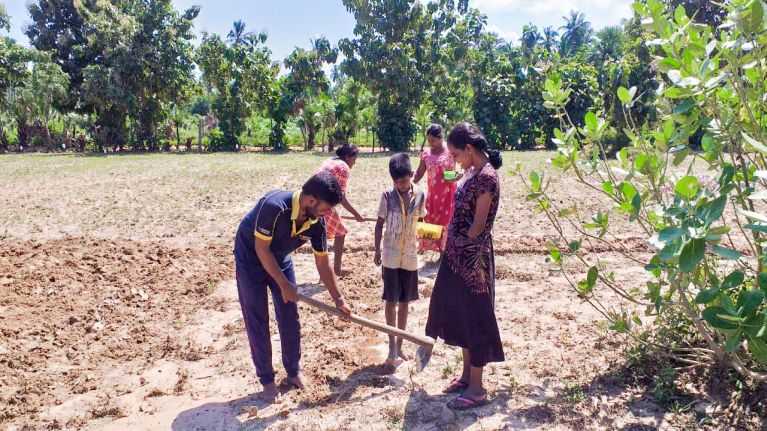 With assistance from the community and support from ILO’s SURAR Project,, Vanitha has begun groundnut cultivation in the land belonging to a relative.

“Engaging in groundnut cultivation makes me feel more confident. I never dreamt that I would be able to contribute to my family and society, feel useful, but today it is possible. My neighbours and community helps me with the agriculture activities, I am also happy to know that there are many in the community with whom I can share my concerns, people who will listen to me,” says Vanitha.

Funded by the United States – Department of State (US DOS), ILO Sri Lanka’s Support to Resettlement and Reconciliation through the United Nations Joint Programme for Peace (SURAR) Project, is supporting 900 conflict-affected and resettled households with high vulnerability, including female-headed households, conflict-affected youth, and persons with disabilities, increase their livelihoods and improve their access to services.