Climate related disasters and shocks in the coming years are sadly a reality, just the same as climate change, until greenhouse gas emissions are stabilized in the atmosphere. Collective global action towards reducing emissions and the timeframe remaining uncertain.  In 2016, Sri Lanka was ranked as the 4th most vulnerable country in the world to the impacts of climate change. Given this, it’s upon us to mitigate the negative impact of climate related disasters in a way that their impacts on communities and economic sectors are minimal.

In the past 3 years, floods only, have cost Sri Lanka more than USD 5 billion in damages and loss of livelihoods. The direct aggregated cost of droughts and landslides also recurrent hasn’t been estimated. These include economic, social, and environmental impacts, which are interrelated. When a disaster hits an area, it hampers the local economic development, productivity, jobs, people’s income, and the human and environmental wellbeing.  In districts like Kilinochchi, where the individuals under poverty line are extremely high, disasters further impoverish the communities, pushing them towards an eternal poverty trap. In districts like Ratnapura, Galle, Kalutara, and Matara, where a combination of urban and rural communities live, economic productivity, especially in the tea plantations is severely affected by disasters. Regional plantation companies, tea small holders, plantation workers and other workers engaged in related income generating activities are amongst those affected.  The damage caused by floods in the tea-growing  areas in these districts in 2016 and 2017 have negatively impacted the growth of the Sri Lankan economy.

Better preparedness and adaptation would ameliorate the impact of each disaster incident. Through increased resilience, rural communities will be able to recover from these annual shocks in a faster and a more effective way. In light of this, the ILO together with the Ministry of Plantation Industries, Ministry of Agriculture, and certain other government partners at district level initiated this project under its flagship programme, Jobs for Peace and Resilience, to help farmer communities affected in the northern province and tea industry in the Sabaragamuwa districts.  The project is aimed at developing a ground-validated model to mitigate the impact on livelihoods  of drought and floods through better management of available water resources in the Kilinochchi district and managing upper watersheds in Ratnapura and Kalutara districts.

The inception workshop of the project was held on the 11th of October at the Mövenpick Hotel, Colombo 3 with the participation of representatives of ILO constituents, Mr. B. Vasanthan, Senior Assistant Secretary (Foreign Relations), Ministry of Labour and Trade Union Relations, Mr. Prasad de Silva from the Employer’s Federation of Ceylon, and representatives from trade unions among many other participants, including key government stakeholders, academia, UN agencies, and NGOs. The project highlighted the importance of social, economic, and environmental resilience in mitigating impacts of floods in addition to disaster relief measures, which are very popular. 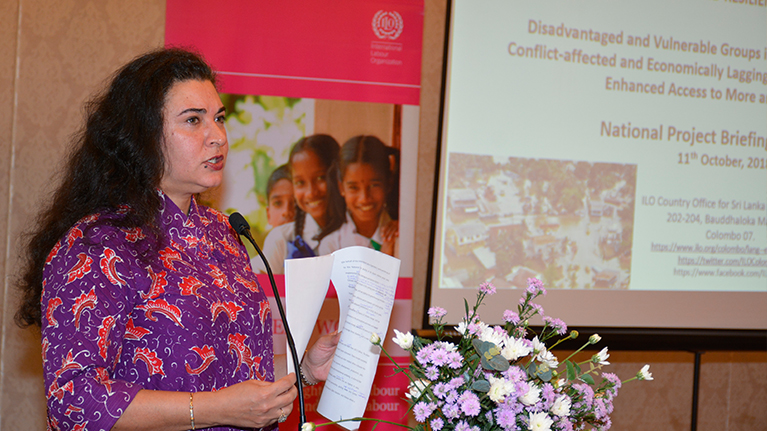 Ms. Simrin Singh, Country Director for ILO Office Sri Lanka and the Maldives, addressing the participants, highlighted the importance of adopting a scientific approach in mitigating flood and drought impacts through improved land and water management measures and fostering policy measures for integrating climate resilience to rural economic development policies and plans. She further emphasized the importance of building resilience of jobs created by disaster-free environments. The ILO envisages that the flood and drought resilient models developed by these two components of the project would be adopted by development partners to scale up and replicate in drought- and flood-affected areas in Sri Lanka.