05 March 2021 (Lima, Peru) – The recovery plans for the world of work after the COVID-19 pandemic in Latin America and the Caribbean must include special measures to promote the return to work for women, who were especially hit by a crisis that caused significant exits from the workforce, unemployment and large demands for unpaid care, the ILO highlighted today.

“This unprecedented crisis has exacerbated gender gaps in the region's labour markets, pulling millions of women out of the workforce, and negated previous advances. We have gone back 10 years in 10 months and now we need to recover those jobs and step on the accelerator of gender equality,” said Vinicius Pinheiro, ILO Regional Director for Latin America and the Caribbean.

Before the pandemic, gender equality was a pending issue that challenged labour policy makers to confront its structural roots, even though significant progress had been made over decades. With the current crisis "new dimensions have appeared that widen the gaps".

“Recovery from the crisis at work must remove the amplification of inequalities caused by COVID-19, if we want to achieve sustainable economic growth with productive and quality jobs. On this International Women's Day it is crucial to reaffirm the commitment to recover the ground lost during the economic and social debacle in our countries,” added the ILO Regional Director.

The latest available data indicates that in 2020 the labour participation rate of women experienced a historical decline of 5.4 percentage points (a decline of 10.3 per cent), reaching a level of 46.4 per cent. Lagging behind percentage rates, this means that nearly 12 million women left the regional workforce due to the destruction of jobs.

The decline in women's labour force participation came after decades during which there had been a steady increase in their incorporation into paid employment. According to data from the latest ILO Labour Overview of Latin America and the Caribbean, it has been more than 15 years since there was such a low rate of participation by women.

On the other hand, the regional unemployment rate for women in 2020 increased from 10.3 to 12.1 per cent, above the general unemployment average, which rose to 10.6 per cent, as highlighted in the Labour Overview. This means that approximately 1.1 million women became unemployed.

The 13.1 million women who have seen their jobs disappear due to the abrupt drop in labour participation and the increase in unemployment this past year added to about 12 million who were already affected by unemployment before the pandemic. In total, around 25 million women are currently unemployed or out of the workforce.

Women have also been affected in the labour market due to their greater presence in economic sectors strongly affected by this crisis, such as services, where about 50 per cent of the female labour force works, and commerce, at 26 per cent.

According to the regional ILO Labour Overview, the contraction in employment in 2020 was particularly important in service sectors such as hotels (-17.6 per cent) and commerce (-12.0 per cent). Added to this is the higher incidence of informal occupations that were particularly hit by the crisis in women’s employment.
Another factor that has affected and, even more, may impede women's job recovery prospects are the growing difficulties of reconciling paid work with family responsibilities. They face a context where educational and care services have been deeply affected and altered hand in hand with health measures for distancing and reducing the mobility of people.

“The pandemic, on the one hand, highlighted the vital importance of these tasks. On the other hand, it further exacerbated tensions regarding the reconciliation between labour market work and family responsibilities. To all this must be added the increase in teleworking and work at home in a context of closure or suspension of care spaces associated with confinement and physical distancing measures,” explained ILO Regional Employment Specialist, Roxana Maurizio.

According to the ILO, the consequences can extend beyond the health crisis if due support is not generated from the public care systems (for the sick, the elderly and children) and the face-to-face school system, which facilitate the return of women to the labour market.

In turn, the significant increase in the under-utilization of the labour force during 2020 may also generate greater difficulties for their reintegration into work in the future. Thus, the regional economic crisis may even have more permanent impacts if suitable socio-labour policy responses are not implemented.

“Policies that include women are not only required, but policies for the recovery of employment and labour markets that, from their design and implementation, have a gender perspective so as not to reproduce the difficulties they face in inserting themselves and staying in the labour market,” commented Maurizio.

Vocational training institutes and systems can play an important role in promoting the participation of women in occupations that are not traditional for them, but with greater future and productivity. It is also important to create a training route for women with low educational levels who have suffered much more from the impact of the crisis and to close the digital gaps between men and women to ensure their participation.

Maurizio added that the challenge goes beyond recovering the heavy labour losses that occurred as a result of the pandemic. "It is necessary to underpin, even more strongly than before, a process that ensures women greater opportunities for quality employment, training and access to new technologies, reduction of gaps and full compliance with labour rights." 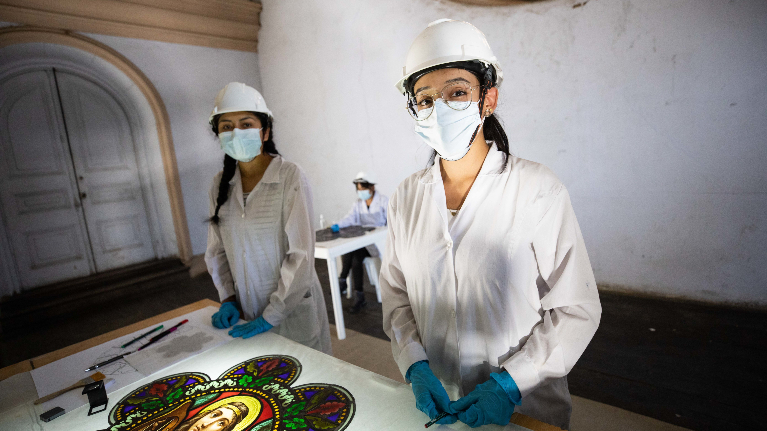