The Office was relocated to 11 St. Clair Avenue, Port of Spain on 1 October 1985. With the large-scale development of technical cooperation activities under ILO’s Director-General Francis Blanchard from 1974-89, the staff of the Office grew to include Regional Advisers, and Administrative/Finance, Programme and Information Units. 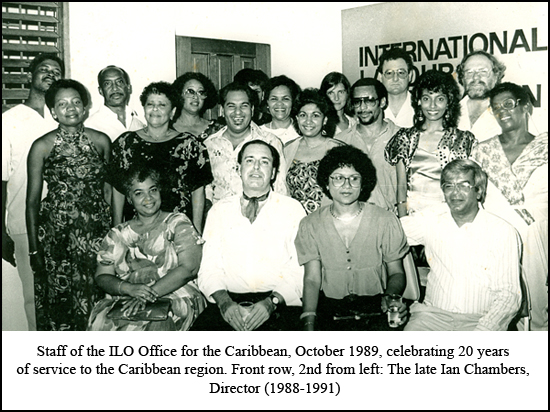 In 1993, under the ILO's Active Partnership Policy (APP), the Caribbean Multidisciplinary Advisory Team was established to bring technical expertise closer to the constituents. The functions of the advisory team were to provide technical support and policy advice to governments and employers' and workers' organizations, to conduct training, technical workshops and seminars, undertake research, provide information, support advocacy and develop and execute technical cooperation projects.

The first major technical cooperation project to be undertaken in the Caribbean region was the five-year Cooperatives project sponsored by the Danish International Development Agency (DANIDA). Over the years, the region has benefited from several donor-funded projects, covering such areas as workers' education, occupational safety and health, labour-management relations, child labour and labour legislation.

On 15 April 2010, the ILO introduced a new two-tier field structure to strengthen the ILO's capacity to service its members in line with the ILO Declaration on Social Justice for a Fair Globalization. The Declaration institutionalizes the Decent Work concept developed by the ILO since 1999, placing it at the core of the Organization's policies. The Office was designated the ILO Decent Work Team and Office for the Caribbean.

Former Directors of the ILO Office for the Caribbean: