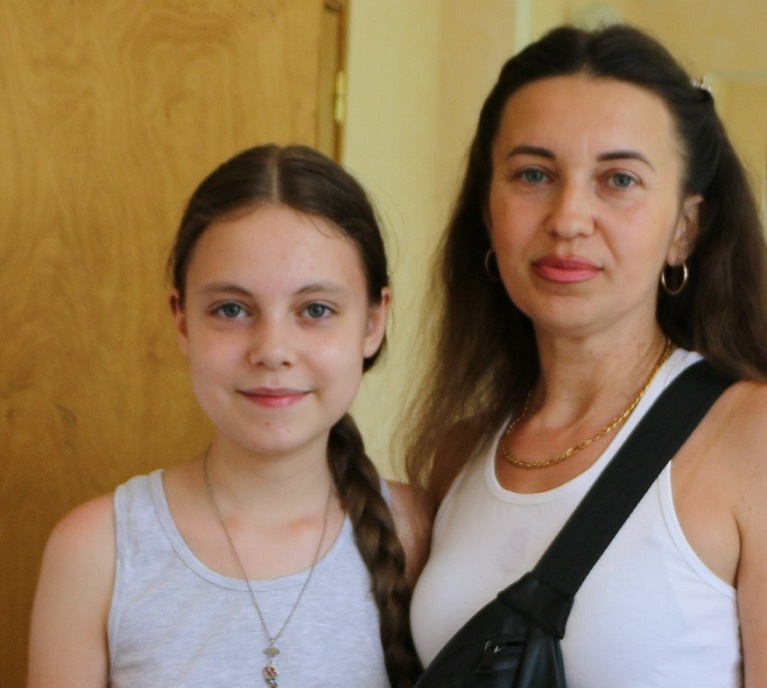 © ILO     Alexia and her mother at Sanatoriul Bucuria-Sind, Republic of Moldova

Since 24 February 2022, the attack by the Russian Federation against Ukraine has resulted in millions of Ukrainians fleeing the country. Many of them have sought safety in the neighbouring Republic of Moldova. The National Trade Union Confederation of Moldova (CNSM) established refugee shelters providing housing and food for desperate people fleeing the fighting. The ILO is working with the trade unions to make services accessible for as many refugees as possible.

To effectively assist refugees, the CNSM has been making use of their properties, both at a hotel in Chisinau and sanatoriums east of the capital. One of the main trade union sanatoriums that have been turned into a refugee shelter is Sanatoriul Bucuria-Sind, around 40 kilometres from the border with Ukraine. This sanatorium has provided over 15,000 bed-nights for Ukrainians over the last months.

At the time of a recent ILO visit to Sanatoriul Bucuria-Sind, there were 200 refugees living there. All of them were housed in decent living quarters, and provided with three hot meals per day.

One of the refugees was 12 years old Alexia. She fled from Nikolaev with her mom after the city was bombed and was no longer safe.

Alexia likes it at the sanatorium: instead of bombs, she watches birds and flowers; the food is good and there is a river to swim in nearby. But like the other refugees at the sanitorium, she misses home.

While it is still too early for most refugees to return to Ukraine, CNSM continues their efforts to help. In addition to the shelter in Bucuria-Sind, their training center in Chisinau provided over 7,500 bed-nights, while the trade union sanatorium in Nufarul Alb provided over 6,000 bed-nights.

The trade unions in Ukraine have also used properties and organizational capacity to assist refugees. One the properties they have used is the Hetman Hotel in Lviv, where the Federation of Trade Unions of Ukraine (FPU) has established a refugee centre. Trade union officials and volunteers work around the clock to give refugees a roof over their heads and provide food, medicine, and clothes.

Tetiana Bilyha is from Lysychansk, Donetsk region. She is one of the refugees receiving shelter and supplies from the trade union. When the war started, she fled towards Lviv with her granddaughter Evelyna. On their way, there was bombing close to Kyiv railway station. They were held up there for 48 hours before they managed to continue towards safety.
“We are very grateful to the Lviv regional trade unions for providing shelter to our children in Lviv. In this difficult time of war in Ukraine, we want our children to be protected, alive and well,” Tetiana Bilyha says.