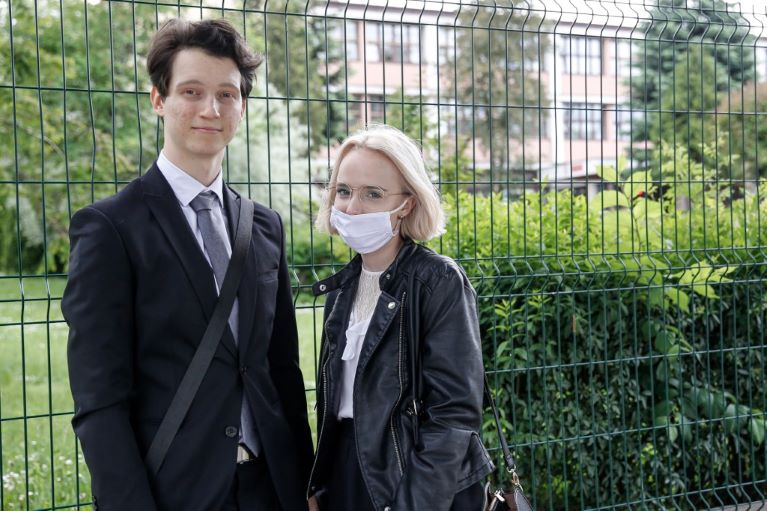 Because of the online delivery of the survey and the sampling strategy applied, respondents were in majority working youth with tertiary education or young people still in education (or combining work and education). Thus, the survey captures particularly well the impacts of COVID-19 on educated young women and men and those with access to on-line resources. The impacts on those young people who are under-represented in this survey are likely to be even more severe, as they were in more vulnerable circumstances even before the onset of the health crisis.

The on-line survey was completed by 2168 young people, aged 18-29 in Poland, representing nearly 20 per cent of the responses collected worldwide and providing a reliable picture of the situation of this population category in the country.

The picture that emerges is not very encouraging. The pandemic has been very taxing on young Polish workers from both employment and career perspectives. Almost 28 per cent (i.e. more than one in four) of those who were employed before the outbreak stopped working altogether, most notably those engaged in services, sales, crafts and related trades. This is higher than the global average of one in six people.

Young women have been more affected than men, in that almost 30 per cent lost their job compared to around 25 per cent of men. Among those young workers who remained in employment, two out of five (41 per cent) experienced a reduction in working hours.  The fall in hours of work has been higher among young women (approximately 2 hours per day as opposed to approximately 80 minutes for young men).

The outbreak caused a significant reduction of the income for one in three young women and one in four young men.

Overall, almost 46 per cent of young workers recount decreases in work-related productivity, but the reported loss on productivity level is more severe for women (slightly over 51 per cent). This may have been affected by the workplace closures, which was widespread in Poland at the time of the survey. Almost half of young workers are working fully or partially from home (45.1 per cent).

About 86 per cent of youth who are in education or training are affected by school closures. Consequently, almost 41 per cent of young students reported a likely delay in their education while 5.6 per cent anticipated that they might be unable to complete their current studies. Furthermore, 34 per cent of young people picture their future career prospects with uncertainty and 12.3 per cent with fear. Young women voice greater concerns than young men. 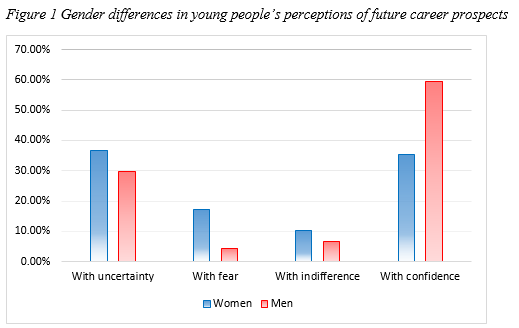 Severe disruption of learning and working, compounded by COVID-19, resulted in a deterioration in young people’s mental well-being. In Poland, 46.2 per cent of survey respondents claimed to be possibly, and 14.6 per cent to be probably affected by anxiety or depression. Women exhibit the highest risk of poor mental well-being in the aftermath of the Covid-19 crisis.

Young people who remained in employment show the lowest risk rates for probable anxiety and depression (11.7 per cent) while young people who stopped working following the outbreak show the highest (15.4 per cent). Overall, the crisis is exposing young people’s mental well-being to serious risks. 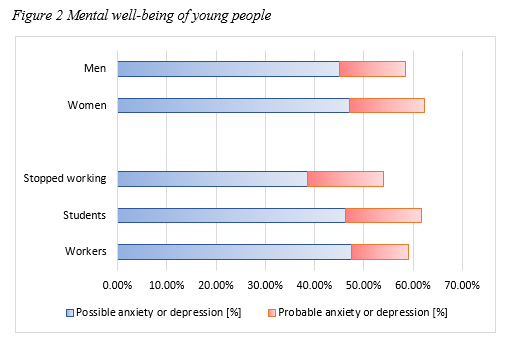 While recognizing the importance of lockdown measures in safeguarding lives, young people also reported having seen an indirect impact on their freedom of movement. Moreover, one in three faced a great or big impact on their right to access information or to participate in public affairs while a quarter of young people experienced difficulties in exercising their right of freedom of religion or belief. Basic needs were an issue, too: for 22.7 percent of youth, their right to housing was being challenged as they struggled to earn enough money to live on.

The findings of this study call for urgent, targeted and smarter investments in decent jobs for youth, including the protection of young people’s human rights; employment and training guarantee programmes; social protection and unemployment insurance benefits for youth.  Greater efforts should be made to boost the quality and delivery of online and distance learning as well as mental health and psychological support services, including to young people facing barriers in accessing digital services. Mindful of the lessons learnt during the 2008-09 global crises, the ILO has been very vocal with its member States in Central and Eastern Europe about the risks of an emerging “lockdown generation” and the need for immediate and concerted action.
Only by working together, with and for youth, we can prevent COVID-19 from having not only a negative but also a potentially long lasting impact on young people’s lives.

Read the Global Survey Report on Youth and COVID-19