The 50 for Freedom campaign to end modern slavery has received support from several Members of the European Parliament representing 17 EU member states.

Led by the ILO, together with the International Trade Union Confederation (ITUC) and the International Organisation of Employers (IOE), the 50 for Freedom campaign aims to mobilize support for the ratification of the ILO Forced Labour Protocol, a legally binding treaty which requires governments to take specific measures to tackle modern slavery in all its forms. The campaign aims to reach 50 ratifications of the Protocol by 2018.

The Council of the EU, with consent of the European Parliament, has authorized all EU member states to ratify the ILO Forced Labour Protocol and urged them to do so preferably before the end of 2016. Despite this endorsement, however, the UK is the only EU member state that has ratified the Protocol so far.

The campaign was launched in the European Parliament on 24 May, kicking off a month during which MEPs are invited to express their support for more ratifications of the ILO Forced Labour Protocol, by adding their name to a public signature panel. The UK MEP Claude Moraes, Chair of the Civil Liberties, Justice and Home Affairs Committee, was the first to sign the panel, followed by German MEP Thomas Händel, who chairs the Employment and Social Affairs Committee in the European Parliament.

The campaign in the Parliament is a timely opportunity to garner the support of MEPs to end modern slavery, just days after the European Parliament adopted a resolution calling on member states to better protect the victims of human trafficking, and the European Commission published a first Report on progress in the fight against trafficking in human beings, and urged EU member states to effectively implement the EU Anti-trafficking Directive.

To raise awareness of these unacceptable practices, the campaign features a forceful exhibition of photographs taken by victims of human trafficking in Belgium, depicting their experiences, hopes and dreams. 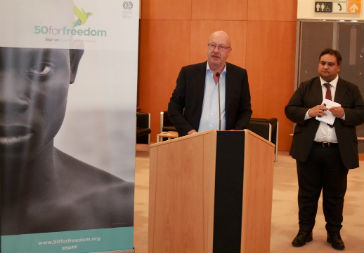