Jordan (ILO News) A steering committee overseeing the development of a national strategy for the cooperative movement in Jordan held its first meeting in November to discuss progress and on-going implementation requirements to design the strategy, which aims to improve the organization and management of cooperatives in different economic sectors in the country.

The committee was formed by the Government of Jordan with ILO support in collaboration with the Jordanian Cooperative Corporation (JCC). It is chaired by the Minister of Agriculture Mohammad Daoudiyeh and includes experts in the field of the cooperative movement, as well as a representative of various cooperatives in Jordan.

Organised by the ILO, the meeting was attended by JCC’s General Director Mahmoud Al Jamaani, Secretary General of Economic and Social Council in Jordan Ahmad Al Sowafien, the former Minister of Agriculture Akef Al Zoubi, among others.

Members discussed the proposal of the cooperative development strategy for Jordan, which aims to build "a prosperous, autonomous, inclusive and self-reliant cooperative movement,” in line with three main outcomes: a conducive environment for the Jordanian cooperative movement; an efficient service infrastructure for cooperatives and unions; and autonomous, self-reliant cooperatives providing efficient services to members.
The ILO, under the Partnership for improving prospects for forcibly displaced persons and host communities (PROSPECTS), in close collaboration with the ILO’s Global Cooperatives Unit  (COOP) is providing technical and financial support in the design and adoption of the Jordan Cooperative Development Strategy.

The ILO regularly provides assistance to governments, workers’ and employers’ organizations on the promotion of cooperatives. It has recognized cooperatives as critical in advancing its mandate for social justice since its foundation in 1919. ILO activities on cooperative enterprises are guided by the international standard on cooperatives, the ILO Recommendation on the Promotion of Cooperatives, 2002 (No. 193).

“I would like to emphasise the ILO’s commitment to support and accompany the country toward the adoption of the Jordan Cooperative Development Strategy, through an inclusive, independent and consultative process involving the government, social partners, the cooperative movement and other key actors,” Simel Esim, head of the ILO’s Cooperatives Unit told the steering committee. “We hope that the development and implementation of the Strategy will also be a success in developing cooperatives in line with ILO Recommendation No. 193,” Esim continued.

ILO Recommendation, 2002 (No. 193) provides a framework for governments to develop the laws, administrative systems and policies that can enable cooperatives to flourish. Since its adoption, more than 110 countries have utilised the Recommendation to support the revision and development of national policies and laws, and has contributed to a number of regional and sub-regional uniform model laws.

JCC’s General Director Mahmoud Al Jamaani emphasised the importance of developing and expanding the cooperative movement in promoting sustainable development and supporting its members, and thanked the ILO for providing its support and expertise in developing the strategy in line with the needs of the local environment and Jordanian legislation.

The meeting was also an opportunity to shed light on a policy paper on the cooperative sector in Jordan, presented by the Economic and Social Council in the country, the ILO’s vision of the cooperative movement in Jordan, and the role of PROSPECTS- a global partnership supported by the Government of the Netherlands - in improving protection, employment and education prospects for refugees and host communities.

“In Jordan, the ILO is working to promote decent and productive work in a number of sectors including the agriculture, by developing the needed skills, enhancing employment opportunities and working conditions for all workers,” said Shaza Jondi, ILO’s Chief Technical Adviser for PROSPECTS in the Arab States region. “We believe inclusive cooperatives based on the principles of Recommendation No. 193 play a major role in all these aspects.”

In addition to the strategy, the ILO has been implementing other initiatives to help build the capacities of cooperatives. Most recently, this included a Training of Trainers (ToT) programme for thirty–one women and men on My.Coop - a training package on the management of agricultural cooperative, enabling trainers to design and deliver their own trainings in the future. 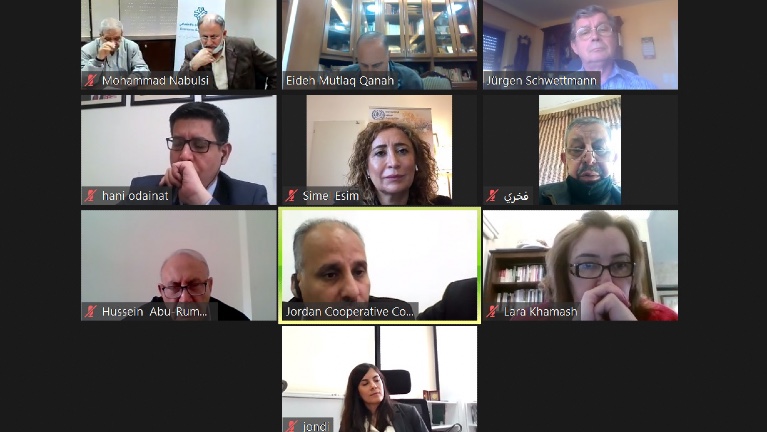 Resources on Cooperatives, Social and Solidarity Economy Legislation and Policy ILO resources on crisis responses by cooperatives and the wider social and solidarity economy (SSE)
Skip to top