AMMAN, Jordan, June 21st, 2020 - On the first anniversary of the adoption of the International labour Organisation (ILO) Violence and Harassment Convention, 2019 (No. 190), the ILO and UN Women launched a social media campaign in Jordan affirming the right of workers to a world of work free from violence and harassment. The two phenomena impact millions of people globally, particularly women, including in Jordan, which has initiated protection and prevention steps in the right direction.

Coinciding with the first anniversary of adoption of ILO Violence and Harassment Convention, 2019 (No. 190) on June 21st, the 4-day campaign seeks community and official support for the endorsement of legislation guaranteeing right of women and men to an environment free from violence and harassment.

Organised in cooperation with social partners, the Swedish International Development Cooperation Agency, and the Norwegian Embassy in Amman, the campaign is posting brief messages from workers, employers, government officials, legislators, and public figures, highlighting psychological, health, and economic impacts of violence and harassment on the world of work.

Convention No. 190 provides the first international definition of violence and harassment in the world of work, referring to a “range of unacceptable behaviours and practices, or threats thereof, whether a single occurrence or repeated, that aim at, result in or are likely to result in physical, psychological, sexual or economic harm and includes gender-based violence and harassment”. It has a broad scope, applying to all sectors, whether private or public, both in the formal and informal economy, and whether in urban or rural areas.

Risks of violence and harassment in the world of work are increasing due to the COVID-19 pandemic and the related economic crisis.

“Convention No. 190 offers tools contributing to response strategies and recovery from the COVID-19 crisis, and promotes building a work environment free from violence and harassment,” says ILO Gender Specialist Reem Aslan. The ILO works with social partners, employers, and the government to ensure decent work for all workers, including dignity, equality, and safety.

Violence and sexual harassment are widespread phenomena that undermine equality at work. They can have negative impacts on victims’ pay, career progression and working conditions, and potentially drive individuals out of the world of work. While they can affect anyone, violence and sexual harassment particularly affect women, and reinforce stereotypes about their abilities and aspirations. They also contribute to fewer women entering or remaining in the labour market (adding to the gender labour force participation gap) and to women being paid less than men (exacerbating the gender pay gap).

“Empowering, supporting and encouraging women politically, economically and socially limits violence and sexual harassment, and can ensure communities are free from the two phenomena,” says President of the Legislation and Opinion Bureau, Fida Hamoud.

Violence and harassment in Jordan and the Arab region

In Jordan, the Ministry of Labour has adopted a violence and harassment prevention policy and code of conduct. In addition, the government submitted amendments to Article 29 of the Labour Law to the Lower House of Parliament. These amendments include recommendations by civil society institutions, agreed upon following dialogue organised by the ILO and its social partners.

In 2013, the joint ILO-International Finance Corporation (IFC) Better Work Programme encouraged implementation of anti-harassment policies and provided training to managers, supervisors and workers in garment factories in Jordan. As a result, workers’ understanding of the implications of sexual harassment increased by over 40 per cent. Likewise, the ability of supervisors and managers to deal with sexual harassment increased by over 40 per cent. Participation in the Better Work Programme and its prevention activities has resulted in an 18 per cent decline in workers’ sexual harassment concerns.

“We have worked and are still working on collective labour agreements to prevent and criminalise violence and harassment in workplaces,” says President of the General Federation of Jordanian Trade Unions Mazen Maaytah. “Collective bargaining as well as awareness-raising and training programmes aim at creating a world of work free from violence and harassment,” he adds.

Despite these efforts, challenges remain. According to a survey conducted by the Jordanian National Commission for Women (JNCW), 75.9 per cent of 1,366 mainly-women respondents said they had experienced sexual harassment at some point in their lives.

“Workplaces are key to developing self-realisation, and work is fundamental for self-realisation, as well as improvement of income and family conditions. It is essential to advance workplaces through mechanisms ensuring work environment is free from violence and harassment,” says JNCW Secretary General, Salma Nims.

“Harassment is a crime. As a state, including the public and private sectors, our responsibility is to ensure that work environment is free from violence and harassment, enabling women and men to practise their right to work, and achieve self-realisation without fear,” she adds.

A 2018 study carried out by the Arab Renaissance for Democracy and Development (ARDD) civil society organisation found that 75.3 per cent of Jordanian women subjected to workplace harassment did not consider legal action.

In Egypt, more than 99 per cent of women experienced a form of sexual harassment, including at work, according to a 2013 study by UN Women and Egyptian organisations. Meanwhile, economic violence, a form of gender-based violence, is the second most common violence in Morocco, after physical violence, a 2015 UN-backed study by the Ministry of Family, Solidarity, Equality and Social Development, showed.

The world of work covers the workplace, including public and private spaces where they are a place of work; in places where the worker is paid, takes a rest break or a meal, or uses sanitary, washing and changing facilities; during work-related trips, travel, training, events or social activities; through work-related communications, including those enabled by information and communication technologies; and in employer-provided accommodation.

The ILO social media campaign in Jordan has received a wide range of messages from female and male workers, talking about their experiences of harassment and bullying in the world of work.

“The workplace was newly established, and the manager asked me to help him. I could not believe what he tried to do. It got me really scared. I left work immediately. I did not even take my salary; I asked my friend to get and deliver it to me,” says Ishraq, who worked as a secretary at a factory.

Harassment is not limited to sexual misconduct, while bullying is a form of psychological violence.

“During my work at a media outlet, I faced bullying and harassment by management due to personalisation of work-related issues. I resisted but eventually quit my job as I lost hope in being able to realize my rights,” says Ahmad, a journalist.

Domestic workers are one of the groups most vulnerable to violence and harassment. One of them tells the campaign: “My employer's son sexually abused me during (COVID-19) lockdown. I am thankful for still being alive. All I want is justice.”

“I was a fresh graduate and enthusiastic about going to my first job interview,” says May, another of those who responded to the campaign. “Unfortunately, I experienced harassment during the interview, which started with a question about my willingness to travel with him (the interviewer), and ended with an attempt to touch my leg. He was good at testing the water, and assessing whether a candidate would be willing to accept harassment, but not at examining her professional qualifications,” says May.

Some organisations have adopted violence and harassment prevention policies.

“The endorsement of a code of conduct helped workers better understand violence and harassment. This has enhanced the work environment,” says a human resources manager at a factory. “Initially, we had challenges in encouraging women to join the factory, but with the code of conduct, families and the local community felt that it is safe to send their sons and daughters to work at the factory,” she adds.

Convention No. 190 and violence and harassment globally

According to statistics in sperate studies published by the UN (2013), EU (2014), and the International Trade Union Confederation (2008), sexual harassment or violence experienced by females stood at 77 per cent in Africa, 45 per cent-55 per cent in Europe, 30 per cent-50 per cent in Latin America, and 30 per cent-40 per cent in Asia-Pacific countries.

In the US, research findings suggest that more than 50 per cent of women faculty/academic and other staff, and 20 per cent-50 per cent of women students, encounter or experience sexual harassment in colleges and universities, a 2019 ILO-UN Women study, reveals.

Convention No. 190 and Recommendation No. 206 build on the understanding that no one should be subject to violence and harassment in the world of work. They protect workers and other persons in the world of work, including employees as defined by national law and practice, persons working irrespective of their contractual status, persons in training, including interns and apprentices, workers whose employment has been terminated, volunteers, jobseekers and job applicants, and individuals exercising the authority, duties or responsibilities of an employer.

As with most ILO conventions, Convention No. 190 will enter into force 12 months after two member states have ratified it. Uruguay became the first country to ratify the convention, on June 15, 2020. 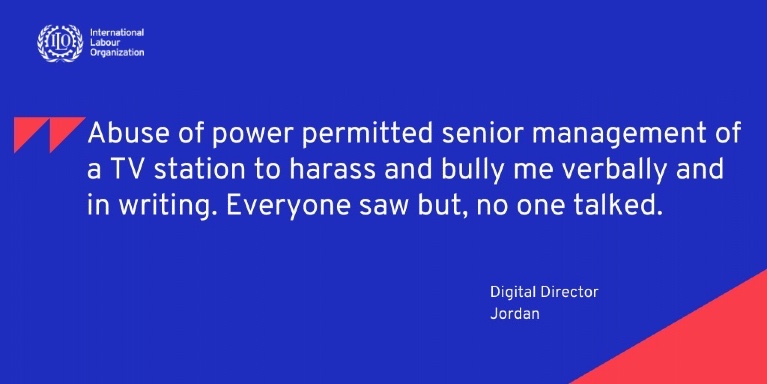