Ramtha and Mafraq, Jordan (ILO News) The ILO organised a series of events for children working on farms in Jordan on Tuesday (June 11) to mark World Day Against Child Labour.

Performers entertained children with a variety of games and competitions at the events held in the cities of Mafraq and Ramtha that aimed to promote education and raise awareness on the dangers faced by children working in Jordan’s agricultural sector. Around 200 children participated in the activities, the majority of whom are Syrian refugees who live and work at nearby farms.

“Today has been very nice. They came and we played games. I wish I could go back to being a child again and to study and everything,” said 12-year-old Bayan who moved to Jordan from Syria a few years ago and now works on a farm with her family picking fruit. “I want to become a doctor one day so I can treat people for free.”

This year’s celebration of World Day Against Child Labour promotes the theme, “Children Should Work on their Dreams, not in the Fields!” Child Labour is a key concern in Jordan’s agricultural sector, where 72 per cent of farmers recently surveyed by the ILO indicated that children under the age of 15 were working in their operation. More than half of surveyed agriculture workers reported a lack of accessible schooling options for their children and a lack of suitable childcare arrangements. As a result, families bring their children to work for lack of a better option.

“There is no school close to here for me to go to. This is why I don’t go to school,” said 15-year-old Moaad who spends his days picking fruit and loading heavy boxes onto trucks. “I like maths and I hope to become a teacher one day.”

“We are marking this year’s World Day Against Child Labour at farms in order to meet with working children directly and talk to them about the importance of education and the importance of going to school and we are doing this through singing and playing because we also want the children to have fun away from work,” said Maha Kattaa, Senior Regional Resilience and Crisis Response Specialist. “We know that many children may not be at school because of lack of schooling and this is why we are looking at ways to improve services that support children and their families, in order to move children away from the fields and back into the classrooms.”

As part of the project’s efforts to gain a better insight into the needs of vulnerable children and their families, a survey was recently conducted in Irbid, Ramtha, Zarqa, Mafraq and Northern Jordan Valley, focusing on tent settlements where vulnerable agricultural workers are based. It targeted 89 households including 152 working children, almost all of whom are Syrian refugees.

Almost half the children surveyed (42.2 per cent) said they work 5-6 days a week, with the majority (57.1 per cent) of children working in agriculture saying they are paid less than one Jordanian Dinar (approximately USD 1.4) per hour. 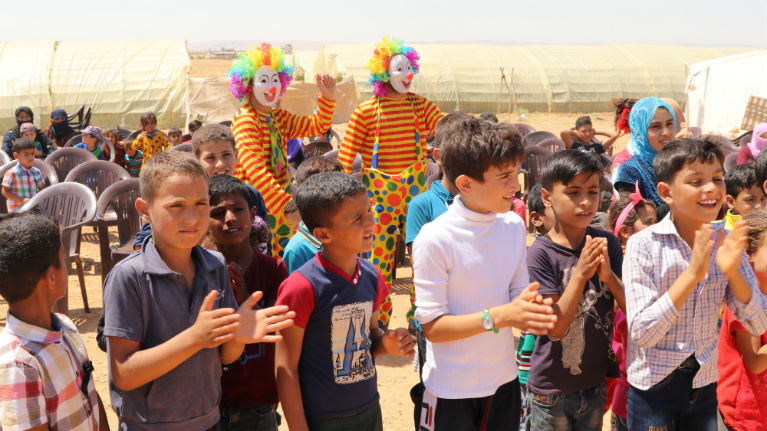