From 29 to 31 January, tripartite constituents from Jordan, Lebanon, Iraq and Turkey came together in Turkey under the South-South and Triangular Cooperation (SSTC) initiative. Through the SSTC, the ILO complements existing development cooperation programmes and stimulates new initiatives. Particular emphasis is put on tripartite partners and support to capacity-building through the exchange of knowledge, skills, resources and technical know-how.

Building on the outcomes of the 2015 “Regional Dialogue workshop on labour market impact of the Syrian refugee crisis”, the SSTC initiative between Jordan, Lebanon, Iraq and Turkey aims at assessing achievements, key challenges, and lessons learned with regard to the promotion of decent jobs for refugees and host communities. The study trip to Turkey served as a platform to exchange knowledge, experiences, and good practices experiences on how to promote decent work as well as to discuss approaches to job creation in crisis settings.

Taking into account that the socio-economic and labour market situations greatly vary between Jordan, Lebanon, Iraq and Turkey, tripartite partners shared experiences and discussed emerging good practices. Working group discussions in Ankara on the first day were followed by a two-days field trip to Gaziantep.

Overall, participants highlighted that country contexts and labour market situations differed highly, however, participants also identified some common approaches. As one participant from Jordan put it: ‘In Jordan, we have the same objectives that Turkey has: We want to provide technical skills to refugees and host communities to prepare them for the labour market and turn the crisis into an opportunity.’

Following discussions in Ankara, the tripartite partners travelled to Gaziantep where they observed skills training porgrammes implemented by ILO together with partners, such as the Gaziantep Chamber of Industry and the Gaziantep Chamber of Merchants and Craftsmen. The visit to the SADA women-only centre highlighted ILO’s efforts to provide training tailored to women’s needs. Further, participants visited a pistachio company in the industrialized zone employing Syrian alongside Turkish worker, which showed how skills training has supported decent work opportunities.

During the closing panel, it became clear that even though good practices exist, there is a need for more initiatives to promote decent work. As one participant from Turkey put it, ‘it will be necessary to defend and promote the rights of all workers, irrespective of nationality, until peace and stability is reached in Syria that would allow safe and voluntary return’. A participant from Lebanon mentioned the difficult economic and labour market situation in his country, and that decent work has to be promoted for both Lebanese and Syrian workers. Numerous participants expressed their will to strengthen future collaborations between social partners to promote decent work in their respective country.

Also, the SSTC initiative was a great opportunity to follow-up and start exploring cross-country collaborations: As such, the Iraqi Federation of Industries (IFI) had the chance to meet Gaziantep Chamber of Industries representatives to follow-up on the possibility to sign a MoU between the two institutions to learn from the Turkish experience and promote business relations. Further, the General Federation of Jordanian Trade Unions (GFJTU) offered to share their knowledge and experience with Turkish trade unions on their experience with regard to their involvement in the work permit process and training.

The second part of the SSTC initiative between Jordan, Lebanon, Iraq and Turkey will take place in April in Jordan. A study trip will be organized to shed light on the Jordanian experience in the crisis response. It will be followed by a regional workshop in Amman further discussing achievements and lessons learned and exchanging experiences on the promotion of decent work. Overall, discussions under the SSCT initiative will be crucial to further enhance and improve intervention and collaboration models for the promotion of decent work for all, refugees and host communities alike. 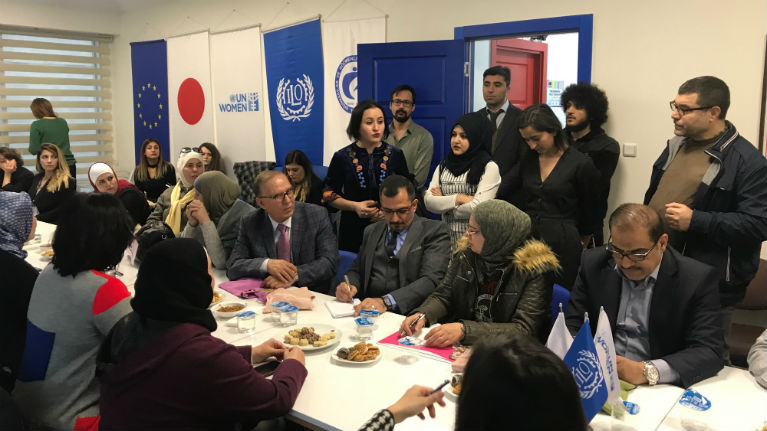 ILO’s support to refugees and host communities in Turkey